Growing up, we had a stable diet of Rangoli on Doordarshan, every Sunday morning. While the songs were mostly nostalgic with Rafi, Asha, Lata, Kishore making the day heavenly, there […]

Growing up, we had a stable diet of Rangoli on Doordarshan, every Sunday morning. While the songs were mostly nostalgic with Rafi, Asha, Lata, Kishore making the day heavenly, there was a segment, towards the end, that played two or three latest songs. By DD’s standards those days, latest meant anything that was released in the nineties. Out of those 2/3 songs, one was mandatory. A cold shoulder wearing Pooja Bhatt, a mischievous Aamir Khan and both fighting for watermelon on a cold night. No points for guessing the song! ‘Dil Hai Ke Manta Nahin’ was pure bliss, for the ears and the eyes. A film where a woman runs from her home to marry the man of her dreams and a reporter who secretly follows her for the scoop of his life was both adorable as well as enjoyable. It’s been many years, but the freshness of the film remains as is, which’s surprising because the film is a remake of a remake!

Inspired from Raj Kapoor’s ‘Chori Chori’ (1956), which itself was inspired from Frank Capra’s ‘It happened one night’ (1934), it’s the story of Pooja who runs off from her home to meet the man of his dreams, an upcoming movie star Deepak Kumar, who by the way, is an incompetent nincompoop. She meets Raghu Jaitly, a news reporter on the bus to Bangalore in a rather funny circumstance. As the bus starts rolling, Pooja falls on Raghu’s lap and amidst the cacophony of laughter, Raghu snidely remarks 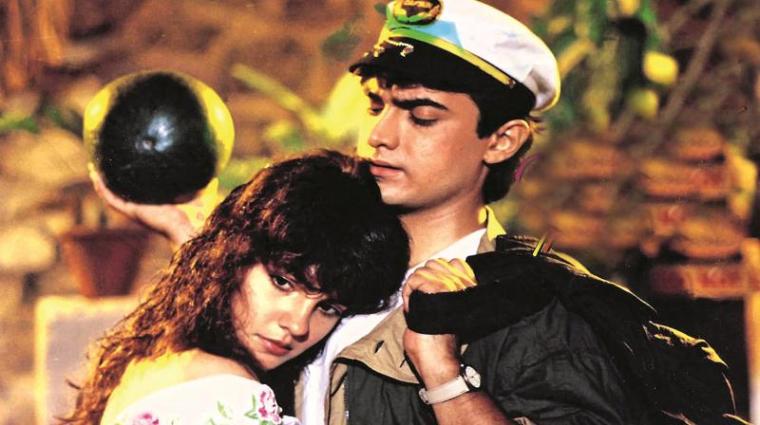 Adventures, mishaps, love, and heartbreak; they all follow Raghu and Pooja, in the midst of the landscapes of Ooty and mesmerizing voices of Kumar Sanu and Anuradha Paudwal. Running from goons and detectives sent by Pooja’s father, both Raghu and Pooja go through a chain of events, resulting in a serious misunderstanding which separates the two. Pooja storms out of Raghu’s life, as he was prepping himself to marry her. More misunderstandings follow and after a heartbreaking rendition of a Kumar Sanu crooned ‘Tu Pyar Hai Kisi Aur Ka’, eventually, Pooja realizes that the man of her dreams is actually Raghu, incidentally whose last name she despises so much. So this time with the support of her father, who also understands that Raghu is the right guy for her daughter and interspersed with the gem of dialogues which oscillates between  ‘Pooja beti bhag ja..’ and ‘Meri beti bhag gayi..’, Pooja runs away from her wedding, leaving a dumbfounded Deepak Kumar. We see a sad Raghu boarding a bus and pleasantly surprised to see a smiling Pooja, sitting inside the bus in her bridal attire. As the bus starts rolling, a bewildered Raghu falls on Pooja’s lap and someone from the bus comically retorts –

As Raghu and Pooja embrace each other, the credit starts rolling, with the now-familiar piano tune of the title song. Heck, I am humming it now, while I write this. 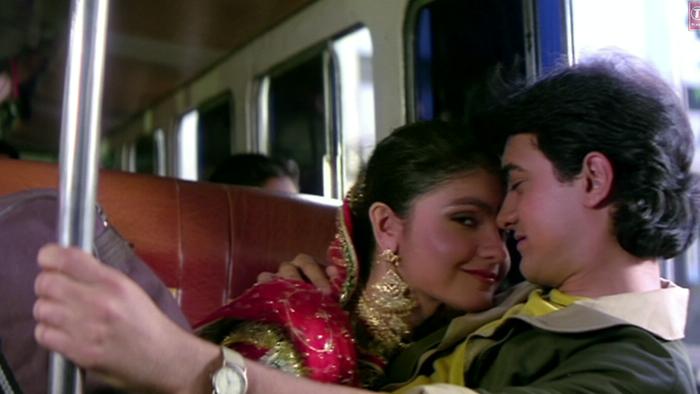 Romantic movies such as ‘Dil Hai Ki Manta Nahin’ are rarely guided by the plot device. It’s always the chemistry between the lead characters that decides whether the story is going to work or not. Raghu and Pooja do not like each other at first but as their journey continues, they start to see a different aspect of the other person. Raghu gets to see a caring and lovable woman that Pooja is, under her garb of a snooty rich heiress. Pooja realizes that Raghu is an honest man, far better than her beau Deepak Kumar, who by the way, is after her for the money. The love that blossoms between the two, hits a roadblock due to silly misunderstandings but eventually love triumphs and makes the soulmates meet again.

The music of the film played a huge role in its success. The soulful melodies by Nadeem-Shravan and the mesmerizing voices of Kumar Sanu and Anuradha Paudwal ruled the charts. Every music lover had a T-Series audio cassette, which was known then as Super Cassette Industries. Songs like ‘Adayein Bhi Hain’, ‘O Mere Sapno Ke Saudagar’ are still remembered by the music lovers. The film also worked for its actors. Aamir Khan and Pooja Bhatt played the lead characters with Anupam Kher as Seth Dharamchand and Tiku Talsania as the editor of ‘Daily Toofan’ newspaper playing the supporting roles. As it was a Bhatt production film, so the Bhatt camp regulars, namely Virendra Saxena, Avtar Gill, Mushtaq Khan and Javed Khan also played small yet memorable characters. Interestingly the tabloids and film gossip magazines at that time were abuzz that both Aamir and Pooja were at loggerheads during the making of the film. When one sees the film, the chemistry between the two actors seldom looks like it!

‘DilHaiKiMantaNahin’ belongs to an era when life was much simple and Sundays were meant to be enjoyed with family. Today, when life is chaotic, Sundays include office work and family has expanded beyond parents and siblings, it still somehow tugs the corners of the heart and reminds of that old time. So until we dwell in the past, allow me to indulge myself in the romanticism that ‘Dil Hai Ki Manta Nahin’ so vividly offers.