Searching Review – The Dark Corners Of The Web

Close your eyes. Picture this. A young teenager runs away from the house. Her father, a single father desperately seeks her everywhere. When he reaches out to her friends, he […]

Close your eyes. Picture this. A young teenager runs away from the house. Her father, a single father desperately seeks her everywhere. When he reaches out to her friends, he discovers that she was a loner. Nobody really knows her. Searching for an answer, her father starts tracing her digital footprints, her social media accounts, her online whereabouts. There he stumbles upon a really disturbing fact. Even he never knew her daughter so well. In this whole wide world where technology boasts to keep people online 24X7, his daughter has vanished.

Debutante director Aneesh Chaganty’s thriller ‘Searching’ is the story of a missing teenager and her father’s pursuit to look for her. The movie begins with a montage of shots, of the Kim family, who likes to chronicle their life events on their personal computer. Within the first ten minutes, as a viewer you get to witness a happy family, their triumphs and failures over the years, eventually going to the present time, where we get to see David becoming a single parent to Margot, after losing her wife to cancer. It especially becomes important as this lays the foundation of the crumbling relationship between the father and the daughter. So when one fine day, Margot goes missing, David’s frantic search begins along with the detective sergeant, Rosemary Vick, played by Debra Messing, a single mom herself, helping him to continue his investigation. The rest of the story forms the crux of this investigation and a devastating finale.

It’s a well-made thriller, shot from the point of view of a person accessing digital networks. For most of the part of the film, you see the protagonist David Kim, played by John Cho lurking on the screen, frantically looking for clues over various social media and sites, that his daughter Margot had ever used. Credit goes to the cinematographer Juan Sebastian Baron and the editor duo Nick Johnson and Will Merrick to have crafted such a technical gem of a film. The story is taut and moves in a breakneck speed. Kudos to Aneesh and his co-writer Sev Ohanian to come up with an edge of the seat thriller. John Cho, who plays the role of the father, is particularly good. His investigation not only leads him to his daughter’s whereabouts, but it also makes him face the hard truth of his life. Debra Messing as the sympathetic sergeant who leads the investigation is efficient. Michelle La, as Margot is good in her short appearance. 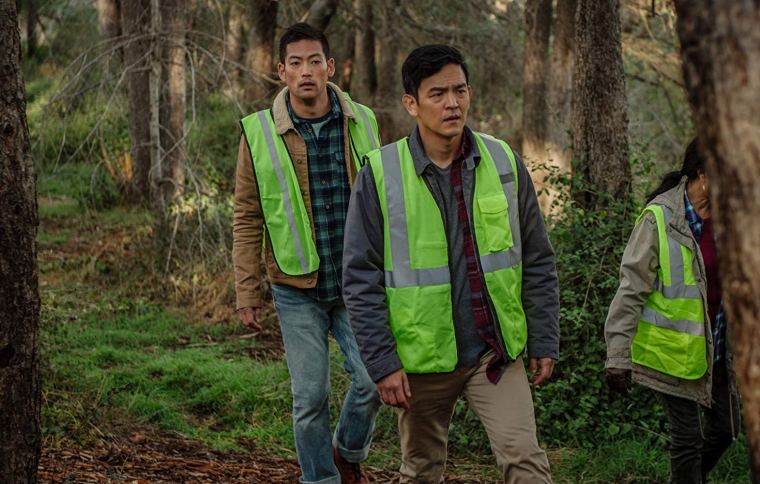 There are some really peculiar yet disturbing facts that the movie tries to bring into the light. A young teenager, who is supposed to have friends, lives a dual life on the internet. Teenagers, who literally give a shit about anyone missing, in order to get more likes/retweets/shares and anything that can maximise their social media popularity, end up doing crazy stuff, like sharing sympathetic videos and pledge for support claims. Cyberbullying becomes a faceless demon as people get brutal over the internet as if it gives them an authority to comment savagely about anything. And a parent, in desperation, can go to any extent for the welfare of the child. ’Searching’ merely points out these factors, without being judgemental as the audience sits in shock, through the entirety of the movie.

‘Searching’ is one of the finest thrillers of this year. Don’t miss it!