There are some films, after just a few minutes from the beginning, you can FEEL how good they are, everything is falling into place, the audience is with the film, […]

There are some films, after just a few minutes from the beginning, you can FEEL how good they are, everything is falling into place, the audience is with the film, audience and film become one. That was how I felt the first time I saw ‘Green Book’, an extraordinary film that might be the exact film we need for right now. America needs healing from the hatred spread by their President, and movies, as they did in the thirties during the Great Depression have the power to heal. ‘Green Book’, in its profoundly moving, often beautiful story of friendship, could heal many wounds as it depicts what Americans, what humanity is capable of doing and feeling.

Set in the early sixties, when race wars were a serious problem, especially in the Deep South, Tony Lip (Viggo Mortensen) works as a bouncer at the Copa, fearlessly tossing out anyone who starts a ruckus. Though he is willing to mix it up and can be a violent man, he is a loving husband and father, incredibly gentle and kind with those he lives. But racism has touched his life too. When his wife gives two black plumbers iced tea, Tony throws the glasses out, annoying his more tolerant wife. Laid off while the Copa is being repaired, he takes a job that will take him on the road for two months as a driver and bodyguard to Don Shirley (Mahershala Ali) a brilliant, well-educated pianist hired to tour the American South. Tall, elegant, near prince-like, Tony knows that the trip through the South will be tough, but he needs the work, so he takes it.

The men could not be more different, Tony always eating, talking, always jovial until the situation calls for him to be different. He loves life, but on the trip, he becomes more and more aware of what he does not know about life. Shirley is soft-spoken, sheltered, and enjoys the quiet. Though the rich socialites hire him to play in their clubs, they will not allow him to dine with them or sleep in their hotels. Though quietly seething with rage, he manages to play for them, smile at their applause, though we become more and more aware the smile is fake and rehearsed. He carries himself with dignity, though manages to land himself in trouble, being bailed out by Tony each time. The men forge a friendship, at first a delicate dance, getting to know each other. When their guards go down, they teach each other what they know about life, they learn to truly live and to like each other very much.

The green book of the title was a book published for the Negro traveller, listing the restaurants and hotels where they were welcome. This is the first realization to Tony of what Shirley deals with. While Tony stays in nice hotels, Don stays in rundown hovels, which angers Tony. He begins to see what his friend deals with daily and is ashamed. When Don is harassed in a bar, Tony violently bails him out, and when Don is caught by a cop in a very uncompromising position with a white man in a bathroom, it is Don who is threatened with jail. Tony does not judge his friend, he again bails him out and having seen it all at the Copa says nothing. 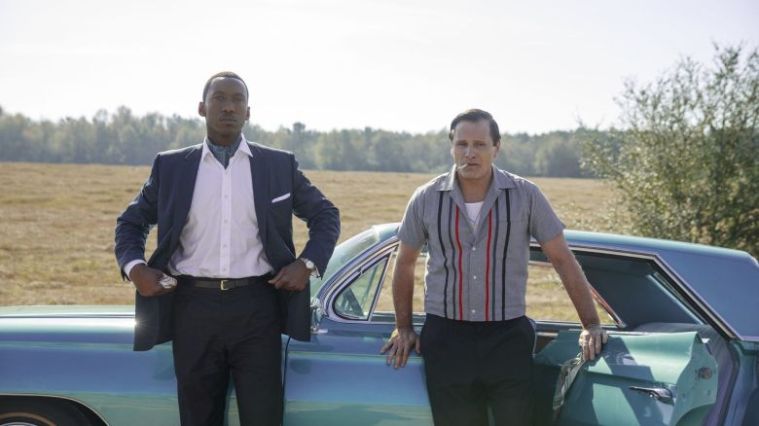 That Tony accepts Don as he is, means the world to Shirley, he realizes Tony might be more than his protector, he just might be his friend. He helps the burly driver write eloquent letters home to his wife, and constantly mystifies Tony with his music. Everything about their world before the journey will be altered by their friendship, and the closing moments, however sentimental and cliched are tear-inducing. Tony and Don look at each other with such admiration and warmth, miles away from their first meeting.

Viggo Mortensen should win the Academy Award for Best Actor for his performance as Tony, it is a revelation. The actor is known for the roles that bring out his dramatic intensity, but here he is funny, broad, it is a grand big performance that charms from the beginning. Speaking in a perfect Brooklyn accent, Tony is a different man at work than he is with his family. Gentle and devoted to his lovely wife, he can explode into violence and does when necessary. He seems genuinely touched when Don asks for some quiet time because his wife often asks for the same. A beautiful, warm performance, perfectly balanced by Ali.

And Ali! The man will and should win the Oscar for Best Supporting Actor for his performance, which would make it his second win in three years. Imperious, almost regal, he is wonderful as Don, knowing so much but ignorant in other ways. Tony is shocked, stunned, that Don has never ate fried chicken, and happily introduced him to Kentucky Fried Chicken….in Kentucky!! Watch his eyes, the hurt in them, the pain, yet he masks it as best he can. That fake smile at the end of each show, so rehearsed, appearing almost grateful that the white hypocrite like his work, but will not dine with him or even let him use their washroom. Though we see very little of her, Linda Cardellini is luminous as Tony’s loving wife, who sees people for who they are, not possessing a racist bone in her body.

It was a shameful time in American history when a man was judged by his colour. It is more shameful today because we know the consequences of such things. Peter Farrelly directed the film, and yes I am surprised as anyone that he broke from the vulgar comedies that made him famous to make such a wonderful film. The director stands back and lets his actors connect, and connect they do. Sometimes the most important thing a filmmaker does is cast his film, and it is pretty clear Farrelly cast perfectly. The film promotes tolerance, understanding, it asks us to see beyond colour, beyond background. It celebrates friendship and love and makes clear to us those two things will always defeat hate. Always.