It has been twenty five years since a young director named Quentin Tarantino exploded onto the movie scene with his astonishing film ‘Pulp Fiction’ (1994) which went on to be the highest grossing independent film of all time, bringing in more than two hundred and fifty million dollars in its initial release. That was extraordinary money for Miramax studios, so much cash you can bathe in it. No wonder Harvey Weinstein called his studio the house that Quentin built! ‘Pulp Fiction’ won the lions share of critics awards that year, Best Picture Awards from the LA Film Critics Association and the National Society Of Film Critics, sweeping the Best Director Awards with all the critics groups. Nominated for seven Academy Awards, the film ran into the feel good juggernaut that was ‘Forrest Gump’ (1994). I am not a Gump hater, on the contrary I think it is a lovely film, bolstered immensely by the superb performance of Tom Hanks and the supporting work of Gary Sinise, Sally Field, Robin Wright (Penn) and the figures from history he encounters. Do I think ‘Forrest Gump’ is a better film than ‘Pulp Fiction’? No, of course not, but I understand why it won Oscars for Best Picture and Director. Tarantino and writing partner Roger Avary did win the original screenplay Oscar but nothing else. Did they need to win? It might have been nice, even evolving of the Academy to honour the film, considering the staggering impact it had.

Tarantino, like him or not changed the very fabric of American film. Like a charge of electricity surging through our bodies, that was how his films hit us. They were super charged with originality, pop culture, violence, profanity, incredible dialogue, homages to film and TV shows, the bare feet and toes of women, and thrilling narratives, which cooked up by this filmmaking sorcerer became ‘Reservoir Dogs’ (1992), ‘Pulp Fiction’ (1994), ‘Jackie Brown’ (1997), ‘Kill Bill’ Volumes One and Two (2003-04), ‘Inglorious Basterds’ (2009), ‘Django Unchained’ (2012), ‘The Hateful 8’ (2015) and his most recent work, this electrifying film ‘Once Upon a Time in Hollywood’.

In a Tarantino film, history might be altered and if you are going to be a part of his universe, you must accept it and take the journey with him. Careers will be resurrected as he has done with John Travolta, Pam Grier, Robert Forrester, David Carradine, Christoph Waltz, Bruce Dern, and Jennifer Jason Leigh. Trusting his gut instinct he casts who he sees in the role, resisting the advice and wants of studio heads, and no one can argue with him.

In this rollicking, thrilling new journey through Hollywood in 1969 we encounter Rick Dalton (Leonardo Di Caprio) a former TV star who believes in the art and craft of acting, but sees his career slipping away. Ferociously dedicated to his craft, and the growing legend of Rick Dalton, he spends most of his free time with his surly best friend, Cliff (Brad Pitt) a former Special Forces warrior, said to be lethal with hand to hand combat, and for the last few years stuntman to his buddy Rick Dalton. While Rick lives in luxury in a home next to film director Roman Polanski and his beautiful friendly wife Sharon Tate (Margot Robbie), while Cliff lives in a trailer, happily, existing it appears on beer and pizza. While Rick is wrapped in actors insecurity, Cliff is obscenely confident, fearless and tough as nails. Not even martial arts master Bruce Lee (Mike Moh) strikes fear into him which bugs Lee more than a little. Doing stuntwork on The Green Hornet, Lee challenges Cliff and the results are not what one might expect, but hilarious nonetheless.

Rick’s sleazy agent, portrayed by Al Pacino finds him a western in Spain but the weary TV actor does not wish to make movies abroad. What do the Italians know about making westerns anyway? But without work, he goes with Cliff in tow, makes several films, returns married, and gets a chance to be a real hero. Cliff becomes intrigued by a dancing, gorgeous young hippy who he gives a ride home. Her home is the old studio Ranch set, Spahn Ranch, owned by the studio by taken care of by wily old Spahn himself, portrayed by Bruce Dern. Her and Cliff are old buddies and happy to see each other, but the young lady Spahn is sleeping with, Squeaky Fromme (Dakota Fanning) is not the least bit happy Cliff is there. Contentious, rude, dangerously intense, Fromme protects “Charlie” the diminutive leader of this group. Oh, his last name is Manson!

Tarantino plunges us into Hollywood 1969, the neon signs that lit up the night sky, as movies and music were advertised in bright garish colours. There is so much happiness in the first half you might actually swoon, but there is a dangerous under current throughout, something that pulls us to that home beside Dalton.

Like a burst of sunshine on a cloudy day Sharon Tate lights up every scene she is in. On the cusp of fame she has married the gifted Polanski, has Jay Sebring (Emile Hirsch) pining for her, Steve McQueen (Damian Lewis) lusting for her, while she is happiest watching herself on film in the goofy Matt Helm film ‘The Wrecking Crew’, sitting in the theatre, her dirty bare feet in full view, giggling, watching the reactions to her scenes in the film. It is a sequence of pure bliss, a lovely young woman thrilled at seeing herself on the big screen. I can say no more about the plot with ruining it and I will not do that. I will say pay attention to the title, that should be enough for you. 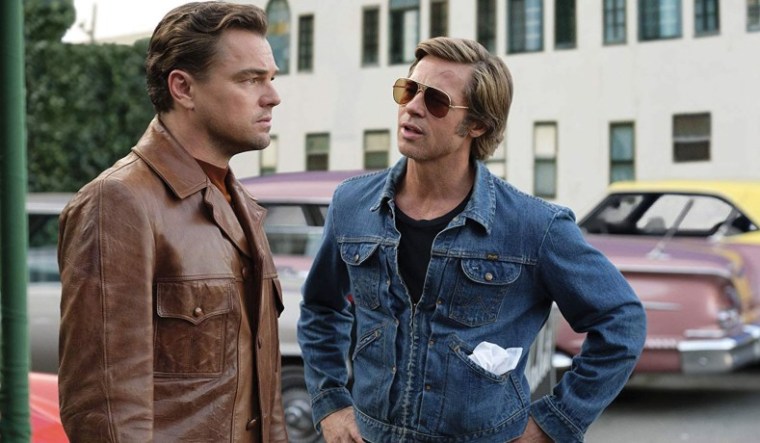 Di Caprio is wonderful as an actor who truly cares subjected to an industry that does not. He puts everything he has into his work, but realizes slowly, no one cares. His eyes fill with tears when told by a child actor he exploded in their scene, because he knows she is sincere, the praise is genuine. Di Caprio could find himself an Oscar nominee for Best Actor come January. Ironically his competition may come from Brad Pitt as Cliff, who exudes confidence and a hint of danger. There is something about him that says, “do not mess with this guy” and indeed, to do so is a very bad idea. His encounter with Bruce Lee is one of the film’s comic highlights! His visit to the Ranch, the nastiness Fromme directs at him, the toxic vibes he feels certainly telegraph what is coming. Robbie is a lovely light presence as Tate, you wish there was more of her. Supporting actress winners have won for six minutes of screen time, so count on her being nominated. 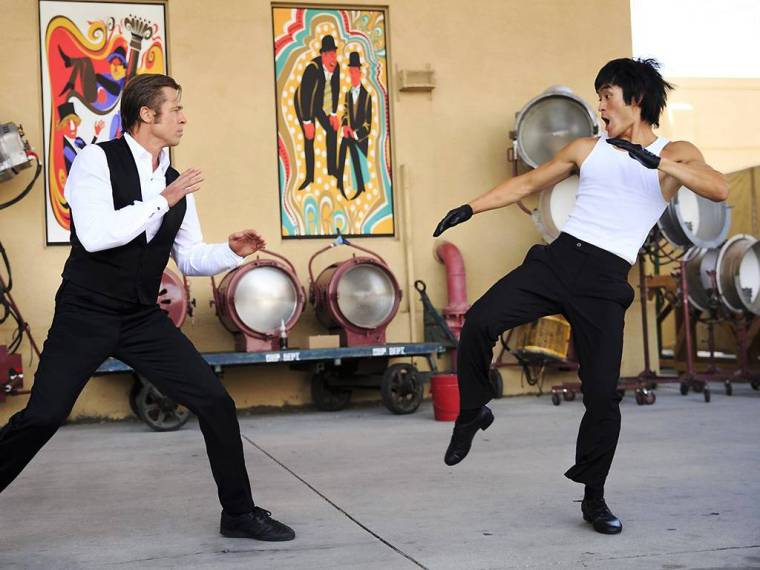 A plethora of actors show up in the film, each doing brilliant work. Fanning is toxic and terrifying as a Fromme, Pacino very good as a slimy agent, Dern terrific as the old cowboy operating the Ranch, allowing Manson and minions to stay for sex with a Fromme. Manson is glimpsed briefly, perhaps thirty seconds but it is enough to fill the film with dread. Lena Dunham shows up as one of Manson’s girls, but the entire scene at the Ranch belongs to the sinister, watchful Fanning as Fromme. She deserves to be Oscar nominated, just a seething character with no good intentions towards anybody but Charlie.

Hollywood is virtually a second character in the film, the production design, costumes and look of the film will sweep you back in time instantly, recalling a time of innocence about to be interrupted. And that music! Like Scorsese, Tarantino chooses spectacular tunes for his films, and this is no exception. Like those heavenly sets, the music takes you back at once. The final sequence at the Ranch will knock you out, both disorientating and unsettling, it is also breathtaking in its brilliance.

This might be the film of the year. Oscar awaits.