The day began at eight am, grabbing a coffee and scone at a nearby Second Cup I made my way to the cinema in the massive Scotiabank Theatre. The home […]

The day began at eight am, grabbing a coffee and scone at a nearby Second Cup I made my way to the cinema in the massive Scotiabank Theatre. The home of 80% of press and industry screenings it is a beehive of energy, constant movement and movies, movies, movies. Let’s get to it.

After three consecutive self indulgent films best called artistic masturbation and failures from an obviously gifted filmmaker, what a joy it was to see Terrence Malick back in the form that gave us ‘The Thin Red Line’ (1998) and ‘The New World’ (2005). I stand in the middle with his Oscar nominated ‘The Tree of Life’ (2011), for while it has great moments, it too was ponderous and indulgent. ‘A Hidden Life’ is a meditative film, a war film without a single battle scene or journey through concentration camps. We see Hitler but only in newsreel footage, enough to let us know who the engineer of this madness is. Yet make no mistake, there is inner conflict at play here, as a purely decent young family man grapples for possession of his very soul. 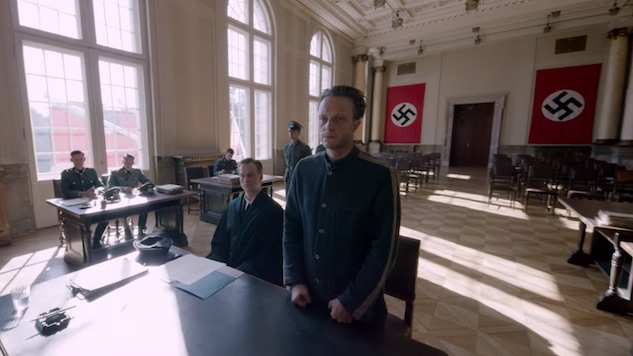 Based on a true story of a young Austrian farmer, Franz Jaferstatter (August Diehl) is a husband, father and son, much loved by his family, well thought of in his community on the mountain of Radegund. There he lives an Edenic like existence with a woman who adores him clearly as much as he does her, his mother and his active children. His wife’s sister comes to live with them later, all work the fields for food and to feed the animals. Though the work is often back breaking, he does not seem to mind, plunging his hands into the black, fertile soil as though it were a warm bath. The family is at one with the earth and nature. 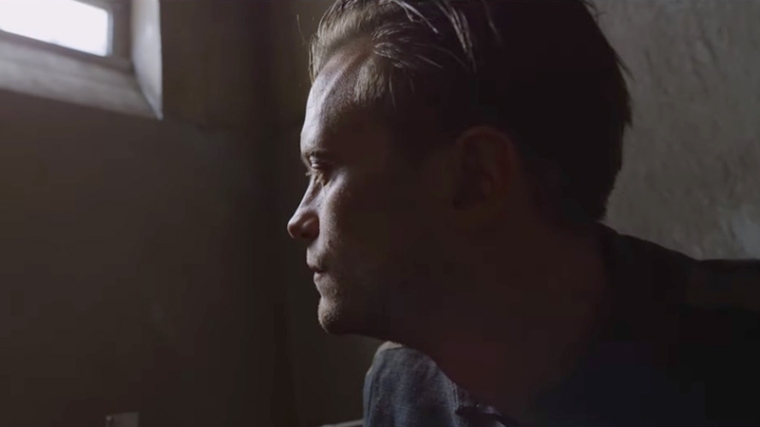 But sweeping change is coming to his life. As an Austrian, he is expected to swear an oath of loyalty to Hitler and fight for the Nazi Party, but Franz cannot bring himself in all good conscience to do so. He despises what Hitler has done and continues to do, and speaks his mind perhaps to freely. When his fellow villagers hear of his leanings he becomes a pariah in the village, ostracized by the village. Finally receiving his notice to report for duty, he goes, but refuses to swear the oath to Hitler which lands him in prison. Battered, beaten, tortured every day by a leering guard he can do nothing except write letters home to his wife and children who are also struggling because of his convictions. Their drinking water is spat in, their gardens raided, the children bullied, and they find they are not welcome at church. These people are true Christians? She cannot believe they are, not anymore. As she and her sister strive to do the work to keep their family afloat, we feel every ache in their bodies as we watch the work the land, punishing work to be sure, but necessary to survive. Would our youth, so entitled with their cell phones and cars do this sort of work? Get their hands dirty? Eat what they have grown? I think not. 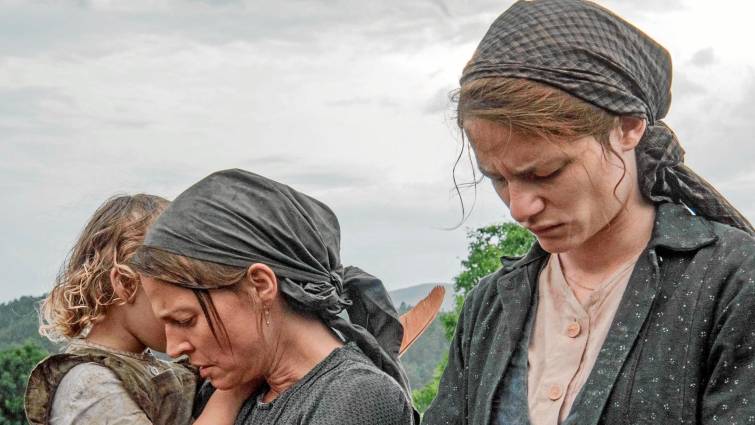 The actors are absolute perfection, the love between the two leads authentic and honest. So great is her love for him that she tells him he must be true to himself when his life hangs in the balance. Malick does a brilliant job creating the beautiful village in the mountains, far from Berlin but not so far as to avoid the strong arm of the Nazis. The cinematography is glorious, giving one the feeling a higher power is watching, staring down helpless to intervene having given man dominion. It is as though a version of heaven dropped to the earth and these fortunate people live there. 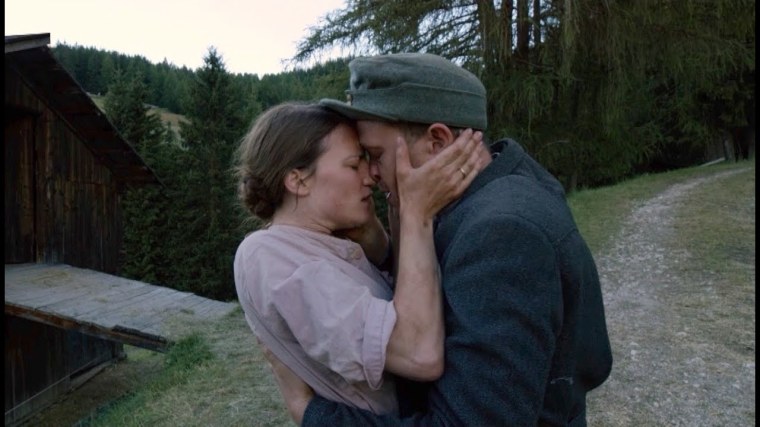 Jaferstatter was executed for his beliefs, and I am stunned this story is not better known! This man was more than just a mere farmer, he was a hero at a time there were none. Seeing the world gone mad, he wants no part of it and is willing to die for his convictions. A much longer review will come with the film’s release in December but count on Oscar attention for Best Picture and Best Director, and likely Best Cinematography and Best Score. A glorious film that will haunt you long after you leave the cinema.

Watching this strange black and white film, there were moments I thought I might be stoned. Thinking back on it I would not choose to see this film stoned, it is simply too bizarre. Set in the 1800’s of Melville, two men, strangers to one another arrive at an isolated lighthouse where they will spend a month. Tom (Willem Dafoe) is an old sea dog, tough as nails and tyrannical about the upkeep of the lighthouse. Crude and vulgar, he is not to be trifled with, but enjoys a stiff drink and drunken night as much as any man who has been to sea. He speaks old language “he lad” being an example and is ferociously loyal to the superstitions of the sea. 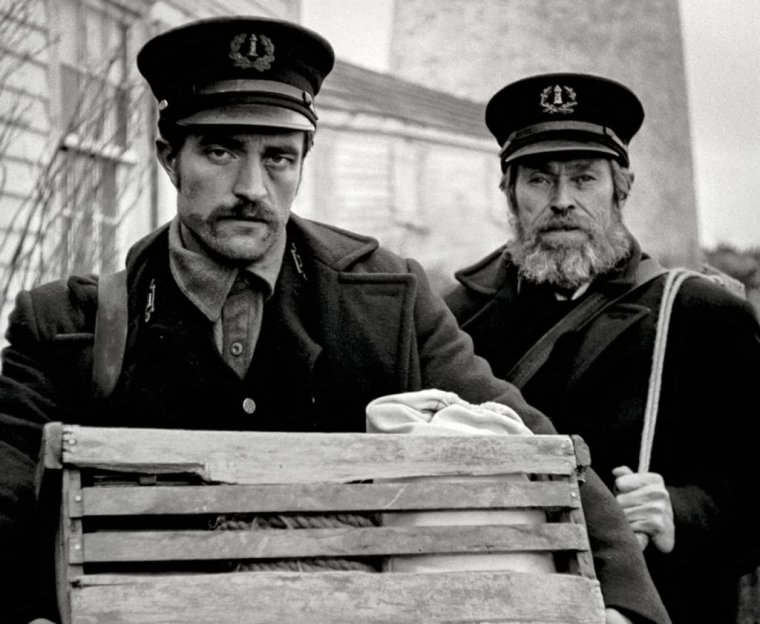 Winslow (Robert Pattinson) is a young man with secrets and who does take kindly to being ordered around like a slave. But his getting paid and hired on again depends on getting along with the cantankerous Tom, so he makes the effort. His duties are of the back breaking kind and though initially combative, he and the old man slowly forge a friendship. As their month comes to an end, weather prevents any ship coming to get them and Winslow begins to slip into madness. He sees mermaids, and is convinced a pesky seagull has it in for him. As he and Tom drink copious amounts of hard booze their relationship swings from hot to cold and back and forth until finally they are mortal enemies. Is this lighthouse a home for mystical creatures and events? Is Tom aware of the power of the lighthouse? Has he brought Winslow here for the purpose of destroying him?

When did Robert Pattinson become a great actor? Previously ridiculed for his vampire in the Twilight franchise he has worked with some world class directors, is willing to take enormous risks in his work, and is among the finest young actors under forty in film. He throws every emotion he has into this performance, initially shy and taciturn, by the end he is a raving, paranoid lunatic quite capable of murder.

Willem Dafoe should be back in the Oscar race for the third consecutive year after nominations for ‘The Florida Project’ (2016) and ‘At Eternity’s Gate’ (2018). He seems a sure thing for Best Supporting Actor again with this wonderful, lived in performance. Robert Eggers again gives us a film in which doom drips from the frame and there is a near constant foreboding of dread. As he did with his magnificent ‘The Witch’ (2015) he is fearless in throwing his audience off balance. He does it here and it works a strange dark magic. The inky black and white cinematography is perfect, both atmospheric and frightening. Both darkly perverse, and perversely dark, it is quite a ride.