Skip to content
Revisiting The Classics: Martin Scorsese’s ‘The King Of Comedy’
Biography

Revisiting The Classics: Martin Scorsese’s ‘The King Of Comedy’

Though dismissed by some critics upon release in 1983, through the years Martin Scorsese’s rather chilling, cautionary tale, ‘The King of Comedy’ (1983) has gained in prominence and is now […]

Though dismissed by some critics upon release in 1983, through the years Martin Scorsese’s rather chilling, cautionary tale, ‘The King of Comedy’ (1983) has gained in prominence and is now recognized as one of the directors best films. Released three years after a fan-shot John Lennon dead outside his New York apartment, the picture was an alarming tale of a stand up comic obsesed with fame, and performing on The Jerry Langford Show, strongly similar to The Tonight Show and Johnny Carson. This man Rupert Pupkin (Robert de Niro) believes it will launch him into fame and fortune, and a friendship with the dour host Jerry Langford (Jerry Lewis) a man all too aware of the price of such fame and fortune.

We see the home life of Rupert long before he launches his scheme to get on the show, how he lives in the basement of his mothers home, talking to cardboard cut outs of movie stars and Langford, as though he were a guest on the show. His day dreams have him good friends with Langfrod, asked in fact to take over as host of the show while Jerry takes a break. When he bails Langford out of a difficult situation with autograph hounds, Langford makes te mistake of telling him to get his tape to him, which Rupert takes as a promise of getting on the show and their friendship. Rupert shows up at Langford’s country home in upstate New York, uninvited, with a date who realizes very quickly they are not friends, nor are they welcome. You can feel in these moments, how badly Jerry Langford, his privacy invaded, wants to swat Rupert like a bug. And more and more Rupert pushes himself into Jerry’s life until he and his wealthy friend Masha (Sandra Bernhard), equally obsessded with Jerry, kidnap him and scheme to get Rupert, at last on the show. 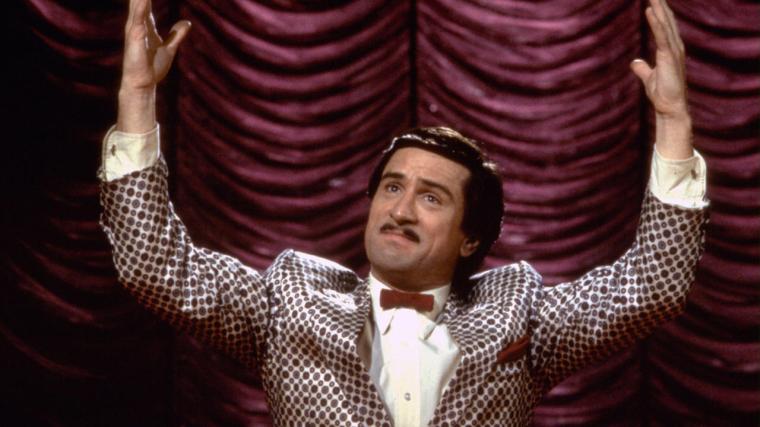 They each have their reasons for wanting Jerry, Rupert needing him to launch his career, while Masha wants him sexually. Langford is repulsed by them both and frankly more than a little afraid of them, and frankly, he should be.

But Rupert has his day, getting on the show, doing his act, and the next day is as famous as Langford, and headed to jail. Yet his criminal act will make him famous, he could end up with book deals, a movie deal, and even repeat performances on the Langford show. The closing moments show us this, but are we merely watching a day dream of Ruperts or his life unfolding? It does not seem unlikely this could be what happens to him in the years to come, criminals often make their fortune describing their crime, and Rupert and Masha are characters enough to become hugely famous. And that is what is terrifying about the film, that people like that, could become beloved by the public who never see just how really disturbed they are. We may laugh and chuckle at what Rupert and Masha do, but put yourself in Jerry’s position, and suddenly it becomes very frightening and not one bit funny.

There was a time there was a genuine distance from celebrities, but the internet has ruined that privacy they once enjoyed. Every aspect of their lives is public fodder, no matter how private, no matter how humilating.

The celebrity stalking has gotten so out of hand there are suits it seems every day to keep deranged or obsessed fans away from those they admire. As Lennon’s death, however, isolated made clear, fans can be dangerous. Deadly even. One imagines Annie Wilkes in Misery, the famous Stephen King novel, smiling, saying to her writer, “I am your biggest fan” with a massive butcher knife hidden behind her back. Return my love or I will kill you. 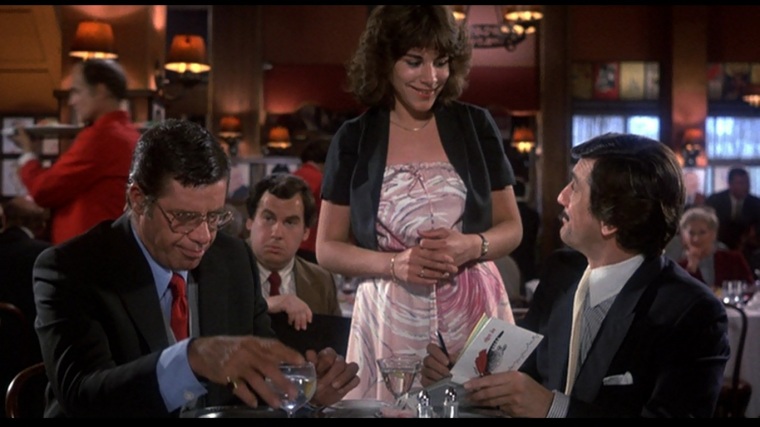 All of a sudden it seems ‘The King of Comedy’ (1983) has become timely, topical, foreshadowing back then what was to come. The film made people uncomfortable, and still has a creepy feeling to it that one cannot quite remember from any other movie. De Niro gives one of his best performance as the maniacal Pupkin (his name is even made for headlines), out of touch with reality having found his own in his bent mind. Watch the hand movements as he shows a friend his autograph book, the flourish with which he turns the page to his own name, convinced he will one day be someone. And though the gun he kidnaps Langford with is a toy, Langford does not know that, his staff does not know he is not in any real danger, though Masha seems hellbent on having him sexually. Rupert is the most dangerous sort of stalker because he believes he is friends with this man, he fantasizes about their relationship, he makes Langford part of his own bizarre world, intruding into his home, into his life. In fantasy sequences we see the two of them having dinner together as Jerry asks Rupert to take over his show for six weeks, we see Jerry asking Rupert for advice, setting up a wedding on the show for Rupert, it is utter madness. The man  has no boundaries with the real world.

Jerry Lewis was never better than he is here as Langford, bored by his celebrity, a captive in his home, unable to walk the streets without being accosted, unable to know people without them wanting something from him. He long ago realized the price of being who he is and accepts it, but does not have to like it. He wears it like a weight, moving slowly, with deliberation through his life, eating alone late at night, perhaps watching one of the many television screens in his apartment, isolated by his fame. When Rupert invades his home he sees it as a personal affront, an unspeakable violation and stands there looking at this insect seething with rage. Though he made a career of being a clown in his youth, and was very funny, Lewis gives a fine dramatic performance here, bringing to Langford the immense sadness of being disconnected from the real world, of being denied nothing, but of never having any real friends.

In her movie debut, wild eyed Sandra Bernhard is a revelation. She is dangerous, she is unpredictable and downright terrifying. When alone with Jerry she talks nonsense, though her intent is clear, she is going to have him right there and then and there is nothing he can do about it. When she stalks Jerry through the streets, she does so with such purpose, without any shame, without any thought to the consequences of being caught. She is, the actress, downright electrifying.

The film’s curious failure came at the height of De Niro’s career, just seven years after ‘Taxi Driver’ (1976) and three years after ‘Raging Bull’ (1980). Audiences were obviously put off seeing the actor portray such a needy, pathetic human being, and stayed away from the film. However through hoime entertainment, video, then DVD and now Blu Ray it was re-discovered by another generation and celebrated for the work of art it is.

The screenplay was written by former Newsweek critic Paul Zimmermann, and comes alive under Scorsese’s solid direction and the alive performances of De Niro, Lewis and Bernhard. Academy Award nominations should have come for Best Film, Actor, Director, Supporting Actor and Actress and Screenplay…at least, but instead nothing. Watching the film today it seems to me to have a lacerating importance, profund message and frightening narrative. How close has this come to happening? I suspect more often than we know.