Martin Scorsese’s ‘The Irishman’ Review – I Heard You Paint Houses!

By now it is clear Martin Scorsese is a filmmaking legend who will be remembered long after he has left this life. Scorsese’s films, the best ones, are films for […]

By now it is clear Martin Scorsese is a filmmaking legend who will be remembered long after he has left this life. Scorsese’s films, the best ones, are films for the ages, movies that historians who come long after me will be discussing if fifty to seventy years. Scorsese, all five for four of him, is a dynamo of energy when speaking, talking as though on speed, hands gesticulating wildly, smiling often, obsessed with all things movies. Yet when on set directing he has a laser focus that his actors feed off, making them better artists too. 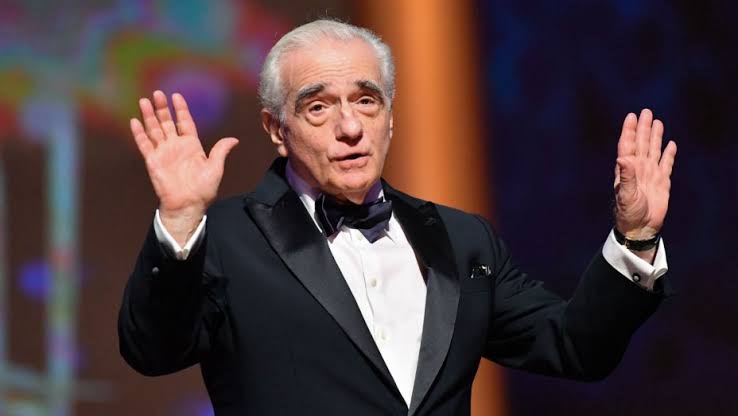 Taxi Driver (1976) was his breakthrough film, a dark, violent character study of a New York cab driver descending into madness. His muse Robert De Niro was electrifying in the film, as he would be many other times for the director. Scorsese worked hard on his surrealistic musical New York, New York (1977) set during the big band era at the end of WWII, but the studio, angry at the delays, increases in budget and rumours of cocaine use (no rumours) on set, seized the film and recut it, leading to box office failure. Three years later he directed the searing boxing biography of Jake MaMotta, Raging Bull (1980) which earned rave reviews but failed at the box office. Nominated for eight Academy Awards, it won Best Actor for De Niro in one of the greatest performances ever put on film and for its editing. At the end of the eighties a panel of North American film critics voted Raging Bull the greatest film of the decade. How Scorsese lost the Oscar, remains near criminal.

The eighties were a time of experimentation for Scorsese, working happily in the indie world, After Hours (1984) as well as for the major studios, The King of Comedy (1983) and The Color Of Money (1986) a sequel to The Hustler (1961), Scorsese bringing Paul Newman his only competitive Academy Award. In 1988 he achieved a dream bringing The Last Temptation Of Christ (1988) to the screen, a splendid study of Christ as just a man that was met with a tornado of controversy. The Academy admired Scorsese enough to honour him with a nomination for Best Director for the film, but Scorsese was very aware that this kind of film wins no Oscars.

His greatest film remains Goodfellas (1990) which swept the major critics awards in 1990, was nominated for six Academy Awards only to fall to Kevin Costner’s’ fine western Dances with Wolves (1990). Make no mistake, his rollicking, fast paced journey through thirty years in the life of Henry Hill, a soldier in organized crime who turned against his friends and was placed in the Witness Protection Program. Simply one of the greatest films ever made, and yes, vastly superior to the Costner western. Through the nineties he directed a remake of Cape Fear (1991), his long dreamed of adaptation of the Edith Wharton novel The Age Of Innocence (1993) to much acclaim, Casino (1995) a superb study of the mob in Vegas that has grown in reputation, Kundun (1997) a beautifully shot but muted story of the Dalai Lama and his weakest film since his breakthrough, Bringing Out The Dead (1999).

Since 2002, five of his seven features have been Best Picture and Best Director nominees, with The Departed (2006) finally earning him that elusive Oscar for Best Director. Gangs of New York (2002), however flawed was nominated for ten Academy Awards, The Aviator (2004) eleven and won five, The Departed (2006) won four including Best Picture and Director. Curiously his thrilling Shutter Island (2010) a superb film was shut out altogether, but he was back with the breathtaking adventure Hugo (2011) which was nominated for eleven Academy Awards and won five. His masterful The Wolf Of Wall Street (2013) was the years finest film, but with five nominations, snubbed. Most recently he directed another passion project, Silence (2016) which is already being hailed an underappreciated masterpiece, but save a nomination for Best Cinematography, was snubbed by the Academy.

Which brings us to The Irishman, his new crime epic for Netflix.

The year’s finest film, The Irishman, this massive crime epic is very different from Goodfellas (1990) which explored the excitement and danger in the world of crime. The Irishman explores, with haunting poetic beauty the regrets, the sense of loss, and the loss of one’s self in that world. At its core, the film explores how men lose their souls in this world, where they are asked to kill their enemies and just as often their colleagues and friends. Through the course of the more than three hour narrative, we will see the intensity of the regret on the face of Frank (Robert De Niro) as murder has a profound impact on his life. What is the price on your mortal soul to live a life like this? 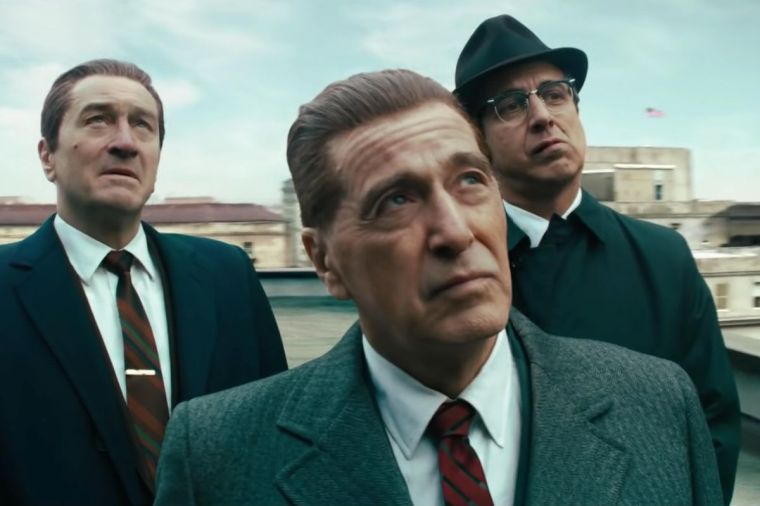 Based on the book I Heard You Paint Houses, code for ‘I understand you do contract killing’, the film explores the life of Frank Sheeran, a war hero who would end up a killer for hire by no less than Teamsters head honch Jimmy Hoffa (Al Pacino). We first encounter Frank in a retirement home, or a near death home, where the camera wheels through this depressing, clinical place, coming to rest on Frank in his eighties and ready at last to talk. Silent for so long, most of his friends long gone, Frank is lonely, utterly alone with his thoughts, his memories, his mind filled with so much death. The last looks on the faces of the men he killed, firmly etched into the landscape of his mind, Frank cannot forget them, he cannot let them go. He tells his story with a cold, matter of fact reality, very little emotion, he was given orders to kill, he killed with no emotion, no fuss, little mess. Earning a fine reputation as a killer, or man who paints houses, he meets Hoffa and becomes the labour leaders’ number one henchman.

Moving through sixty years, the film is as much a study of America as it is the story of one man. From war and the dirty secrets of that conflict, American soldiers gunning down German POW’s after forcing them to dig their own graves, through four decades of crime merged with labour, power at the loftiest of heights, it is a fascinating life unfolding before our eyes.

When Sheeran gets the order to kill Jimmy Hoffa, now wildly out of control, he falters very briefly before doing what he does best, he follows an order. Hoffa disappeared in 1975 and according to legend could be in the New Jersey swamps, in the cement that holds in place skyscrapers, or scattered about on highways. No one really knows but Frank Sheeran claims to be aware.

Joe Pesci was talked out of retirement to portray mob boss Russell Bufalino, he gives a performance unlike anything he has done before. Pesci has in the past portrayed some genuinely terrifying men, Tommy in Goodfellas (1990), Nicky in Casino (1995), vicious violent killers who possessed no regard for human life. Here he is the complete opposite, a well mannered, even elegant man, well spoken, even tempered but just as dangerous as the aforementioned characters. Bufallino needs not lose his cool, he understands such behaviour could place him in peril, something he learned years before. However when he issues an order, he expects it to be followed. There is a confidence in his eyes and the way he moves that speaks to the room that this man is in charge. The moment he and De Niro are onscreen together that magic happens, these guys have instant chemistry that reaches back to Raging Bull, Goodfellas and A Bronx Tale (1993). There is something comfortable in their banter, something authentic and very real. Watching the two actors is a privilege.

Al Pacino is a revelation as Jimmy Hoffa. This is among his finest work, as the actor prone to loud, near bullying performances uses that to create Hoffa who was a bully, was brash, was loud. The leader of the powerful Teamsters Union, Hoffa made a deal with the devil, in his case the mob for muscle, and that very deal would be his downfall. Pacino slips into character like putting on a tight fitting, perfect glove. Hoffa’s arrogance shines through, but so does his cunning, his genius for making the right moves, even his attitude about going to jail. When released he is no longer the number one guy in the union, and he resents that, fighting to get back his position. The mob, does not care for that.

Watching Robert De Niro do great work again was a very pleasant reminder that he is among the greatest actors in movies. True his recent forays into comedies and films far beneath him have left audiences wanting something like this because an entire generation cannot recall De Niro in The Godfather Part II (1974), Taxi Driver (1976) or Raging Bull (1980) meaning they have not seen him at his finest. Even Goodfellas (1990) was nearly thirty years ago! When reunited with Scorsese there was no doubt De Niro would shine, but who expected one of his finest, chilliest performances? Cold, remote, even though he has a wife and children, his life is his work.

The film explores the inner workings of the mob, but the final thirty to forty minutes are often heartbreaking as we see the betrayal of long standing friendships and the spectre of regret. One of the questions posed by Scorsese through his characters is what was it all for? All the murder, the scrambling, when really, we all come to the same end? Death finds us all. Scorsese could not have made this film until now, like Clint Eastwood with Unforgiven (1992) he had to age into into. Now elderly, approaching eighty, I suspect he understands more about hurt, pain, regret, and even betrayal than he did when he made the free wheeling Goodfellas (1990). 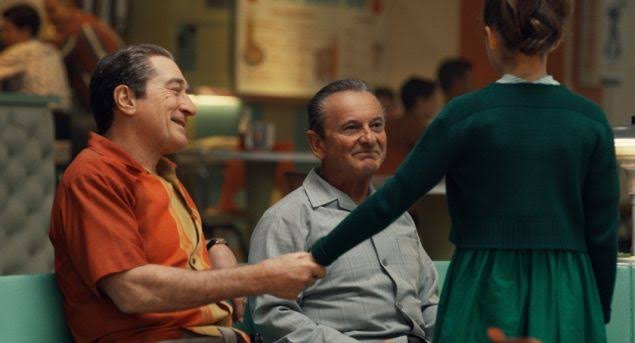 Much will be made of the expensive De-ageing process the film went through in post-production. Is it perfect? No but nearly, and the only time you really notice is that sometimes as younger men, De Niro and Pesci move stiffly, like older men. Much was made of De Niro looking older than he should be during the scenes set in WWII but go back and look at photographs of young men of that period, they look much older than they are! War ages you, and complaining about this when such a magnificent film is playing in front of you is really nitpicking.

The Irishman is ultimately a melancholy, somber look at choices through ones life, those you can be proud of and those that leave you with shame and regret. I bet Frank Sheeran sees the accusatory gaze of his daughter, portrayed by an imperious Anna Paquin, late at night, accusing him of not being a father and accusing him of what she suspected, rightfully, he really was. Alone in that nursing home waiting his turn to die, the days and nights must be endless to such a man, knowing that he will die alone, surrounded by the ghosts of the men he killed. Would Jimmy Hoffa hold his friends’ hand as he died? Or mock him?

All of these men lived in a violent world, they all knew the price, they each realized there might be a bullet in the head waiting for them. Yet this lived, they prospered, shaped history, before getting old and becoming irrelevant. We all get there.

The Irishman is a film for the ages, made by our greatest living filmmaker.