Nominated for ten Academy Awards, ‘Gangs of New York’ was thought to be the film that was finally going to land Martin Scorsese his long-overdue Academy Award for Best Director. Often nominated for films such as ‘Raging Bull’ (1980) and ‘Goodfellas’ (1990), the most gifted American director of his time was still without his Oscar. Working for the first time with Miramax and Harvey Weinstein, the wars between the two hard headed men were legendary, and the film was more than a year delayed. Now in fairness part of that was concern that the events of 9/11 would impact the release of the picture, but to be fair Scorsese was still tinkering with the film so the extra year gave him the time he needed or felt he needed to make the film he wanted. Weinstein was always concerned with the length and the violence but battling with diminutive Scorsese proved to be impossible, so he left him alone. The film was the biggest of the directors career, the pressure on him brutal, as it was the largest budget he had ever worked with, the epic he had wanted to make for more than a decade.

Opening in 1846 we watch as two gangs ritualistically prepare for war in the open square of the Five Points of New York. It is a breathtaking sequence as the Dead Rabbits dress in all manner of outlandish costume for fighting. Like a baseball team they grab their weapons and head up the walkway into the light of the sun for the hand to hand fight which will leave many of them dead in the street. The Protestant natives are led by the vicious, relentless Bill Cutting, known as Bill the Butcher (Daniel Day-Lewis) while the Catholic immigrants, known as the Dead Rabbits are run by Priest Vallon (Liam Neeson). Despite their war, the two leaders have enormous respect, even affection for one another, but one of them must die to establish supremacy among the gangs. With Priest that day is his young son Amsterdam, ten, who watches in horror as his father is viciously killed by Bill, using his butchers tools to destroy the only man he holds in any esteem.

Years later, the boy returns seeking revenge, Amsterdam (Leonardo Di Caprio) hopes to becomes a trusted allie to Bill before he cuts him down. He finds an old friend, Johnny (Henry Thomas) who helps him learn who is who and what is what within the Five Points and introduces him to the people he needs to know including Bill. The boy Vallon learns most of the men who fought with his father are now working for Bill, though one of them is a corrupt cop. Keeping who he is truly is a secret, he gains his way into Bill’s inner circle, befriending the man and eventually becoming a trusted friend, even taken under the wing of the man who killed his father.

Learning the criminal and corrupt ways of the Five Points, run by Boss Tweed, though Bill is really in charge, Amsterdam falls in love with a pretty pick pocket, Jenny Everdeane (Cameron Diaz) who was once a lover of Bills’, and his target in a knife throwing act. Johnny too adores Jenny, and when she returns the attentions of Amsterdam, he betrays Amsterdam, telling Bill of his true background, causing Bill to erupt in rage, throwing a knife into him before Amsterdam can do the same to him. The knife wounds Amsterdam, badly, and Bill mutialtes his face with a hot blade so all will know of his treachery. Nursed back to health by Jenny, the wounded Amsterdam goes to war against Bill, knowing it could mean his death. Bill toys with Vallon beating Johnny within an inch of his life before forcing Amsterdam to kill his friend, ending his suffering, and then Bill will murder the good man Monk (Brendan Gleason) who has been elected Sherrif, savagely throwing a butchers axe into his back in broad daylight.

As the Irish immigrants arrive on ships and are immediatley sent to fight in the Civil War, the war erupts between the two gangs, causing all hell to break loose in the city. As cannons are fired into the city, destruction reigns but through the smoke the fight carries on. Bill seeks out Amsterdam in the smoke and begins slashing at him with his blades, barely seen, always in motion, until a cannon ball causes an explosion that tears into Bill, mortally wounding him. Amsterdam finishes him, with his fathers knife, avenging his father, but also knowing he is killing his mentor and a man he came to admire in spite of himself. Bill seems almost grateful it is Amsterdam who takes his life away from him.

The final shot of the film shows Amsterdam and Jenny at Bill’s grave, next to Priest Vallon, before they leave for San Francisco, as what will become Manhattan sits in the background. As they walk away the scene morphs through the years and decades to today, where the graveyard is now a forgotten patch of weeds, and the New York skyline incudes the Twin Towers which will be taken down in 2001 by a terrorist attack. As the years pass and the skyline changes, the song Hands Across America by U2 slowly comes up on the soundtrack. 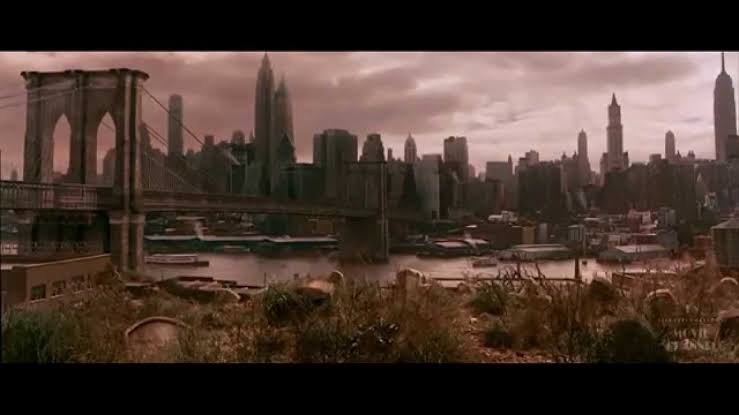 The film opened to mixed reviews in December of 2002, though some critics such as Peter Travers of the Rolling Stone hailed ‘Gangs of New York’ as the years best film. Overall the reviews were positive but not the universal raves Weinstein had been hoping for. Most of the criticism settled on the performance of Diaz which was the weak link in the film, and the fact Di Caprio, still growing as an actor, was all but blown off the screen by Day-Lewis. The length drew sharp criticisms, as many felt the film could have ended much earlier, though I confess I had no trouble with the length of the picture.

Daniel Day-Lewis gave a brilliant performance as Bill Cutting, a braod, larger than life performance of a violent man who moved through his day with absolute confidence that he could cut down anyonbe who tried to kill him. Ever watchful he fails once to see an assassin and it is young Amsterdam who saves him, leading the younger man to believe he might indeed admire his fathers killer. As a butcher, Bill is very aware of where the knife must be plunged to create a would or a kill, and he carefully shows the younger man what he is talking about. Day-Lewis is such an intense character you cannot take your eyes off him, but the performance is so great, so remarkable, no one else in the film comes remotely close to what he is doing.

Di Caprio while very good was not where Day-Lewis was as an actor (is anyone?) in the film, though he came the closest. The experience certainly taught him a great deal because every film in which he appeared afterwards he was terrific, piling up Oscar nominations and finally winning in 2015 for ‘The Revenant’. Henry Thomas was excellant in the small role of Johnny and Brendan Gleason cut an imposing figure as Monk, who deals out his justice with a large club. Jim Broadbent was outstanding as Boss Tweed, terrified of Bill but knowing he dare not rise against him. Only Cameron Diaz seems woefully out of her element. With her accent wandering, she feels too modern for the film, wildly out of place and never once holds her own against any of the actors. Surely another actress in her age group could have given a better performance than this? Kate Winslet? Anyone?

Much attention was given to the exceptional detail of the production designs of the film, as New York (1846-1863) was recreated with meticulous detail. Most of the film was shot in Italy at the massive Cinecitta Studios which housed the massive city sets for the production. There were so many delays that actors Robert De Niro and Willem Dafoe were forced to leave the production due to other committments, forcing Scorsese to recast key roles. The film felt like a big sprawling epic that had no centre, no driving narrative. Sure we wait for the moment Bill knows who Amsterdam is, but we know it must happen to give the film its drama so when it does it is almost anti-climatic, there is no real power to the reveal. And Johnny’s betrayal is telegraphed from the first moment Amsterdam lays eyes on Jenny and Johnny realizes they have eyes only for each other.

Daniel Day-Lewis won Best Actor awards from the New York Film Critics Circle, the Los Angeles Film Critics Association, the Boston Film Critics, the Chicago Film Critics, and the Screen Actors Guild while being nominated for the same award by the Golden Globes and the Academy. It remains one of the most acclaimed performances of the new century and further established Day-Lewis as the most gifted actor of his generation.

Weinstein did everything possible to get Scorsese that Oscar but the facts were, it was not his best work, the Academy liked it but did not love it, and a message was being sent that just because Mr. Weinstein wanted an Oscar for Mr. Scorsese did not mean the Academy was going to do it. Scorsese stated publicly that he was humiliated by the extent Weinstein went to in order to get him votes. Scorsese won the Golden Globe for Best Director, and though ‘Gangs of New York’ was nominated for ten Academy Awards it didn’t win a single award. The director was nominated by the DGA as Best Director as well, but again, he lost to greater achievements that year.

In the end the film over reaches and falls short. Despite a simply remarkable performance from Day-Lewis, the movie remains just a very good film, not a masterpiece and defintely not a work of art. You can see how it might have been, and indeed length has something to do with it, but I am not sure where he could cut.