Revisiting The Classics : Clint Eastwood’s ‘The Bridges Of Madison County’ (1995)

When Clint Eastwood stepped in to direct the film, there were bowls of protest. Bruce Beresford and Steven Spielberg both toyed with directing the picture, Beresford going so far as […]

When Clint Eastwood stepped in to direct the film, there were bowls of protest. Bruce Beresford and Steven Spielberg both toyed with directing the picture, Beresford going so far as to suggest women for the key role of Francesca, the Italian war bride transplanted to farmland Iowa. Eastwood, freshly honoured with Best Director and Best Picture Academy Awards for his western masterpiece ‘Unforgiven’ (1992) immediately suggested getting the finest actress on the planet. While Jessica Lange, Anjelica Huston, or Sigourney Weaver are fine talents, he did not understand why no one had suggested the obvious, Meryl Streep? To Eastwood, the two time Oscar winner seemed the only choice, so he got her number and made a call. Though Streep despised the novel, “calling it a crime against literature” she responded warmly to Eastwood and the screenplay, and after learning he would co-star with her as National Geographic photographer Robert, she signed on.

When the film was released in the summer of 1995, adult audiences had a mature, intelligent love story to which they could respond. Deeper, free of the metaphors that cluttered the book, it was a deceptively simple love story, far deeper than initially thought, bolstered by two brilliant performances from the two leads.

Francesca (Streep) is a lonely Italian born housewife in the sixties, preparing to be alone for a three day weekend as her husband and two teenagers go to a fair in another part of the State. She is secretly looking forward to the solitude, to a break from the endless cooking of meals, laundry, housework. Lost, looking for the famed covered bridges, National Geographic photographer Robert Kincaid (Eastwood) pulls into her driveway to ask directions and rather than telling him how to get there, she hops in his truck and shows him.

Their lives are forever altered the moment they lay eyes on one another.

Over the weekend their mutual attraction becomes impossible to deny, overwhelming to both, and they give in to it, making love through the night. Kincaid decides they are soulmates, that this kind of certainty comes along once in a lifetime and they owe it to themselves to act upon it. No question, despite just hours together, they are deeply in love, the soulmate each believed was out there. 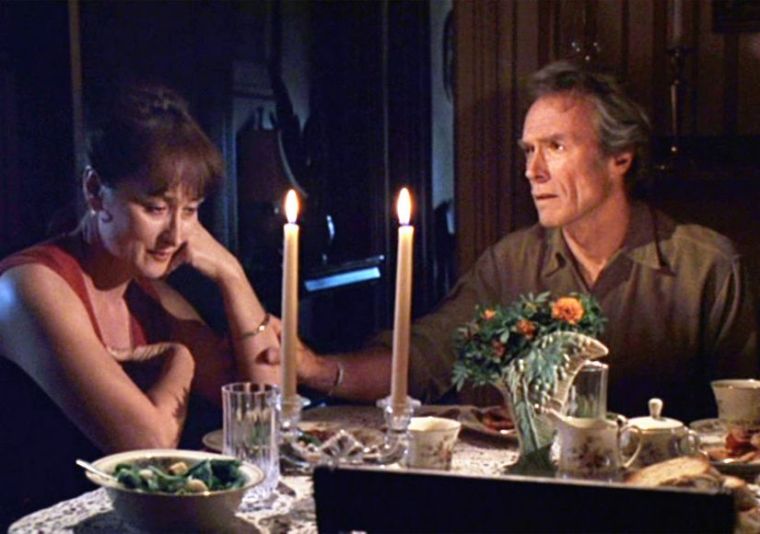 Despite the love she feels for him, she does not leave her children, home and husband, instead of leaving Kincaid weeping in the pounding rain, the raindrops merging with his tears. Francesca lives the rest of her life in that farmhouse, caring for her husband after a stroke, never mentioning Robert to anyone other than her best friend. When Robert passes, his lawyer sends a box of Francesca, filled with remembrances of their weekend, and a book of photographs dedicated to her. When she dies, she writes her experience down and shares it with her children, who are stunned by the revelation. She asks that she be allowed to have Robert in death, having given her life to her family.

To claim that the narrative is simplistic would be a foolish statement because there are so many layers to the characters and storytelling. Patiently, Eastwood allows the story to unfold at a languid pace, unhurried, realistic, perfect, knowing everything hinges on the chemistry between him and Streep. Luckily, the intense eroticism between them was quietly astonishing, you could feel their heat as they moved ever closer to one another. Eastwood captures an extraordinary sense of carnality with moments such as Francesca in the shower where seconds ago he stood naked, or their slow dance in the kitchen, essentially foreplay which they know just as we do.

A love story rises and falls on the connection between the two actors, without it, the story is limp, dead on arrival. These two possess heat the moment they lock eyes with one another, their banter easy, their conversations exciting as though they had been conversing their entire lives. We feel the connection, and watch as they dance ever closer to one another until they finally kiss, at which point there is no turning back.

Streep is simply astonishing as Francesca, a genuinely decent good woman who had dreams of her own but gave them up to raise a family. With a Robert, she finds her dreams in middle age, but chooses to not disappoint her children, to not wound her husband, a good man, but not an exciting man. In Kincaid, she encounters her soulmate, the absolute love of her life, but she knows they cannot be together. Streep allows her pain to manifest, building to a shattering crescendo in the truck where she sees Kincaid about to leave. She very nearly leaps out of the truck into his arms, but does not, once again sacrificing her own dreams for her children. The performance is among the five best of her career for which she was nominated for the Academy Award as Best Actress, and by the Screen Actors Guild Award as Best Actress. As Kincaid, Eastwood gives a lived-in, leathery performance, capturing the essence of a man who sees life in images. Well-travelled, he is as surprised as anyone to find this woman, his soulmate living in sleepy Iowa as though she was there waiting for him. He takes risks as an actor he had not ever taken before, appearing vulnerable and naked emotionally. In every way he kept up with a Streep, moving through the arc of the film with her, beside her, the two of them enhancing one another’s work, elevating the other’s performance.

The narrative is bookended by scenes of Francesca’s children arriving at the farm for the reading of her mother’s will. By the end, they are galvanized by her sacrifice, what she gave up for them, and the sheer depth of her love for Kincaid. These scenes could have been dropped without impacting the story between their mother and Kincaid. Respectfully, neither of the younger actors portraying her adult children lack the talents of Eastwood and Streep, they look out of their league. That quibble is the only one I have with the film, one of the greatest adult love stories on film over the last fifty years. Shamefully the Academy ignored the film, save Streep’s single nomination. Nominations should have come for Best Picture and Best Director, Screenplay, Musical Score and Cinematography.