The great Charlie Chaplin had once said that life is a tragedy when seen in close up, but a comedy in long-shot. It’s true considering the times we are living […]

The great Charlie Chaplin had once said that life is a tragedy when seen in close up, but a comedy in long-shot. It’s true considering the times we are living right now. Each of us is part of a struggle that feels enormous at times, crushing the average Joe under his own load of expectations. However, that very struggle can turn into a comedy, if it’s watched from a different vantage point. Such is the travesty of the life that we are living today. Director Rajesh Krishnan’s ‘Lootcase’ is the story of a common man who accidentally discovers a bag full of cash. Just as he’s about to fix all the miseries of his life, he encounters some unscrupulous folks who originally are looking for the bag. Misfortune happens at every turn and just as Chaplin figured, we get to witness a rib-tickling comedy of errors.

Good writing is the backbone of a great script. At times, it’s the writing that makes an average script to soar high. To be honest, on paper, this script may look pretty ordinary. But a terrific ensemble cast makes it become super entertaining stuff. Nandan, played by a superb Kunal Kemmu is a technician, who makes his living from a local press. Meagre salary and an ever-demanding family, forces Nandan to pick up this abandoned bag, that he accidentally discovers a night, on his way to home. Here, the writer emphasises on the fact that family is what makes a man take drastic steps. Nandan unknowingly sets a chain of events in which a shrewd politician, a bunch of crooks, the rival gang led by a National Geographic channel aficionado boss and a corrupt cop get embroiled. He even names the bag – Anand Petikar, meaning the bag of happiness! Kunal Kemmu is an underrated actor who has time and again proved his mettle. This film gives him ample ground to showcase his volume of talent. 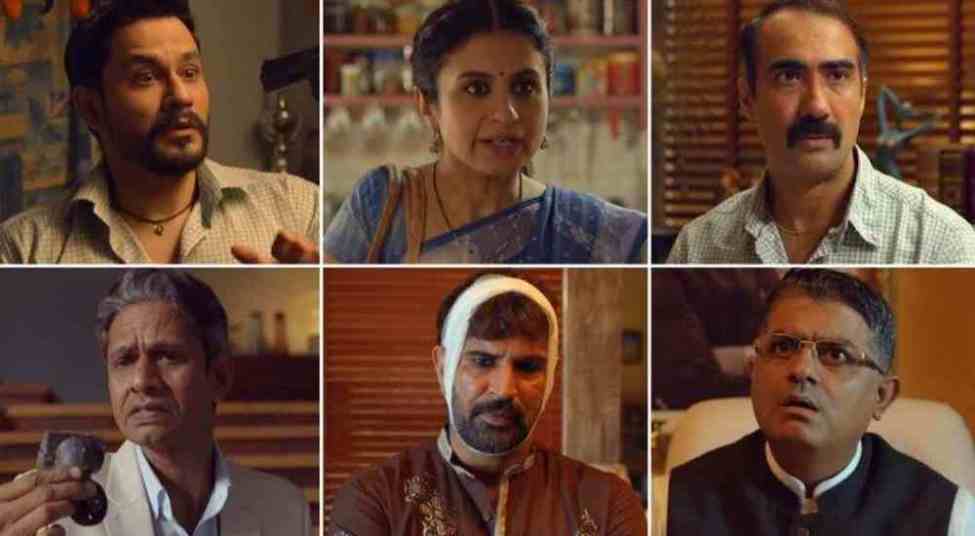 The writing is so fresh that it gives the required space to have the peripheral characters a backstory of their own. The politician MLA Patil, played by Gajraj Rao is a cunning man who manipulates people into doing his deeds. The Nat Geo loving boss Bala, played by Vijay Raaz, loves to provide an analogy to his understudies, using zoological references. He even chides them, for not having the Nat Geo channel subscription. The corrupt cop Kolte played by Ranvir Shorey, who’s got a bad repute of fake encounters, is forced to do the investigation of the missing bag, at the MLA’s behest. He’s a hoot as the ruthless cop. Even Nandan’s wife Lata, played by Rasika Dugal is a nagging wife who loves being called as Chinese dish names by her husband,  yet when she discovers the money, she gets afraid and asks him to get rid of it. And yes, there’s Nandan’s boss played by Vijay Nikam, who on a drunken stupor, opens his heart to Nandan about how his father never considered his true value as a son. These are fictional characters yet the director Rajesh Krishnan and writer Kapil Sawant make them as real as the next-door neighbour. And the actors enacting these characters take them to a notch higher.

Dialogues and situational comedies uplift the entire film. In a hilarious moment, Nandan is caught across two gun-totting parties, in the middle of a shoot out. He’s asked by a gang member, to ascertain his identity  – “Tu kiska aadmi hai, Omar ka ya Bala ka?” To which he replies – “Main Lata ka aadmi hoon !!!” which loosely translates to ‘I’m my wife’s man!. In an earlier scene, when an auto driver is asked by Kolte whether he’ll be able to identify the suspect from the sketch, he says – “Sir, meri drawing kharab hai!!” Nandan, as part of his ongoing buffoonery, foolishly enquires at a bank about the cash counting machine, saying – “Ghar main ek suitcase bharke cash pada hai, gin ne ko nahin ho raha hai!”. These and many more such rib-tickling dialogues make the movie a must-watch.

In these moments of despair, films such as ‘Lootcase’ provide the much-needed laughter that we all seek. The climax of the film exemplifies another Chaplin quote that states – Nothing is permanent in this wicked world, not even our troubles!