Our correspondent John H Foote writes the review from the ground zero of #TIFF2020 I apologize in advance for the use of a single word in this review, I detest […]

I apologize in advance for the use of a single word in this review, I detest the word, but to make my point, needed to use it. Truly, I am sorry for its inclusion.

Though it is fact Cassius Clay (before he was Ali), Malcolm X, Sam Cooke and Jim Brown, famous black men all, gathered in a Miami hotel in 1964 to celebrate Clay’s stunning victory in the ring over Sonny Liston, no one knows what was said. Thus the film and play upon which it is based are speculative as opposed to being historical.  Regina King, the Oscar-winning actress directs her actors with a confidence that suggests she has been directing far longer than she has been an actor, though this is her feature film debut. Wisely she keeps the film about the conversation, with only a few scenes outside of the hotel. And for anyone who thinks watching and more so listening to four intelligent men just talking could be boring, think about how much of your own life has been spent just talking with good friends? How much of your entire life is spent just talking to friends? 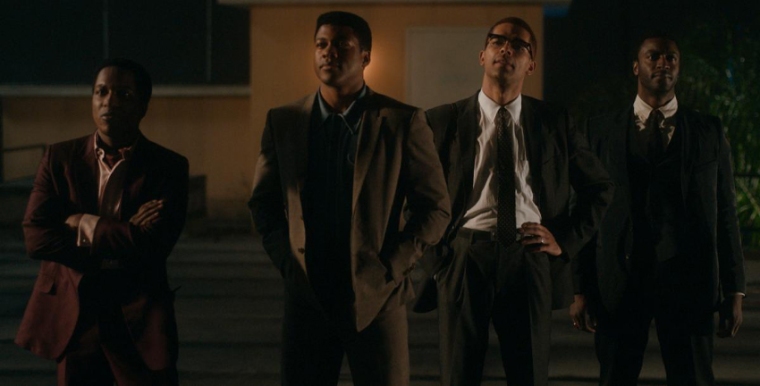 In 1964, the men in this film, Sam Cooke, Cassius Clay, Malcolm X and Jim Brown were famous men, well-known celebrities who happened to be black. They were each very high in their field, some of their achievements front page, life-altering news. Can you even begin to imagine exactly what was said, how intimate were the conversations and did discuss the inherent racism sweeping the United States? Of course, racism was talked about only because we know how terrible some whites, especially in the Southern United States treated blacks.

The opening scenes provide some stinging slaps to the face as Cooke (Leslie Odom Jr.) playing the legendary Copacabana night club watches as whites leave the club when he begins to sing. More powerful still is Jim Brown’s (Aldis Hodge) visit to a friendly, genial white man who appears to possess great admiration towards the gifted football player. Sitting on the porch of his grand mansion Mr Carlson (Beau Bridges) the white man tells Brown what a credit he is to his sport, his state, America. But when Brown offers to help the older man move some furniture inside the house, Carlson tells him, “You know we don’t allow niggers in the house.” The words, that single word stings more to Brown than the toughest player in the NFL bringing him down. It is spoken so casually that we know it comes from his mouth often.  Within a year two of these unique men would be dead, Malcolm X (Kingsley Ben-Adir) would be assassinated and Sam Cooke would be the victim of a shooting. Where they forever silenced? Here we are, in 2020 still curious what they might have had to say. In today’s society with racism toward blacks sweeping America in a hatred supported by Trump, this film becomes as relevant as at any time in history.

The performances carry the film, which given the fact the director has a background in acting, is no surprise. Ben-Adir creates a thoughtful Malcolm X, fearing the actions that might be taken by Elijah Mohammad as much as he does the whites threatening to kill him. Speaking in a hushed tone, his intellect burns through, giving us a superb performance. Equally outstanding is Eli Goree as Cassius Clay before he became Muhammad Ali, arguably the greatest boxer of all time. Goree creates a brash, swaggering Clay, nailing the confidence but more importantly bringing to the part that musical delivery in the manner he spoke. If there was a single aspect Will Smith missed in ‘Ali’ (2001) it was the voice and how the champ used it. As Cooke, Odom Jr., best known from the musical Hamilton is terrific, velvety smooth in public but a storm is clearly gathering beneath that veneer. And Hodge as Brown is wonderful, a hero to millions of fans but many would not permit him to enter their home or allow their kids to hang his picture in their rooms…because he was black!

With no reporters or fans watching the quartet are free to be themselves, free to say what they mean, free to be exacting who they are with men they trust entirely. Given that two of the group had less than a year to live gives the picture a haunting quality that works on every level. Playwright Powers Kemp adapted his play to the screen, opening it up just enough to allow King to bring visual flair to the wordy film.

So, yes indeed, the rumours are true.  Oscar-winner Regina King has directed a very fine adaptation of a very solid play, with sterling performances from an excellent cast.