The old fashioned credits begin and over them we hear solemn music, then a solitary horn, lonely and mournful, foreshadowing what J.J. Gittes (Jack Nicholson) will feel by the end […]

The old fashioned credits begin and over them we hear solemn music, then a solitary horn, lonely and mournful, foreshadowing what J.J. Gittes (Jack Nicholson) will feel by the end of this superb film noir, arguably the finest of the genre ever made. There are very few screenplays that rank alongside the genius of ‘Chinatown’, which was the finest work film Robert Towne wrote, and so beautifully directed by Roman Polanski, you might find yourself in awe of the film. 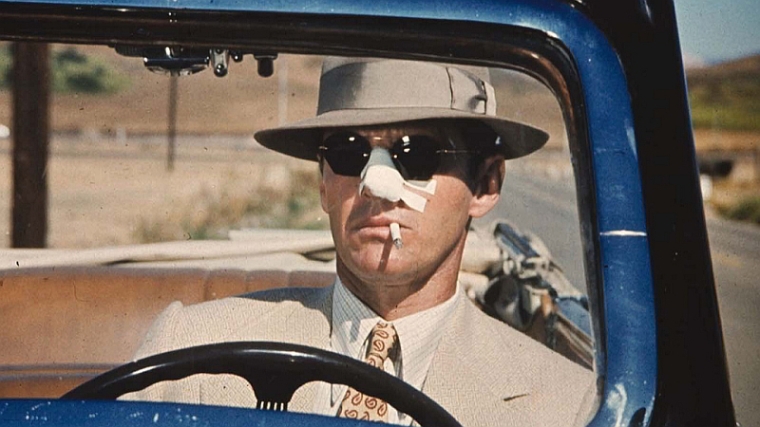 The director took control of a challenging screenplay and fashioned it to make sense to the audience. That was no mean feat because ‘Chinatown’ is a complicated puzzle of a film as written by Towne, a film demanding to be listened too, to not miss a second of the dark, unravelling narrative.  Credit for the darkness of the film is given to Polanski and acknowledged by the writer. Initially, the film had a happy ending, all parties, except the villain, got what they wanted but Polanski believed for the film to have the power he believed it could have, the lead actress, the tragic character had to die. So he re-wrote it, just the ending as tragedy, and though Towne was angry he eventually agreed it was the right move. Winning that Oscar for his superb screenplay might have helped.

Polanski. Let’s get this out of the way.

You may despise him as a human being, as I do, but you cannot deny the man his artistry. His parents were victims of the Holocaust, so there are deep scars within, but that does not excuse his rape of a minor, a child who might have been willing, coached by her mother wanting stardom for her child, but a child is a child. And this girl was not fifteen or sixteen, she was 13…three years beyond ten, which makes Polanski’s action reprehensible. He fled the United States before sentencing because he knew he was going to jail, and a five-foot-three movie director is not made for prison. Polanski fled back to Europe and has remained in countries that do not extradite to the United States, continued to make films, some very good ones and maintained his status as one of the cinema’s greatest filmmakers. In 2002 he was honoured with an Academy Award for Best Director for his Holocaust drama ‘The Pianist’ (2002) but just last year in the ultimate act of hypocrisy there were rumblings the Academy was going to take their Oscar back and cancel the win. This though they knew at the time, without any doubt, he was guilty of the crime, at the height of the #MeToo movement the Academy was going to be politically correct. It never happened because it seemed cooler heads prevailed, he had been voted Best Director, leave it alone.

Despite the Oscar win in 2002, ‘Chinatown’ remains his masterpiece.

The film deals with water rights in California in 1937 but goes so much deeper. At this time in history, a man could own the water rights and do as he pleased, and that man is Noah Cross (John Huston) an obscenely wealthy man with unspeakable power in the state. His daughter, Evelyn Mulwray comes to private investigator Gittes, in the beginning, to announce she is suing him but relents, drops the suit and asks him to find out if her husband is cheating on her, which she believes to be true. He tails the man, overhears him refuse to create a new water reservoir that would be dangerous, and photographs him with a pretty young blonde woman. The pictures land on the front pages of the local newspapers bringing a huge surprise to Gittes. The real Evelyn Mulwray (Faye Dunaway) comes to his office and announces he can expect a huge lawsuit. Knowing he was set up, Gittes tries to clear his name but before he can Mr Mulwray is killed. Having snooped around, Gittes realizes the water is being released at night into a reservoir, and in fact nearly drowns by being caught in it. The Water company, nervous he is getting too close to the truth send two henchmen to rough him up, one of them, portrayed by Polanski slashes his nose with a switchblade.

Gittes becomes involved with Evelyn who now wants him to find out what happened to her husband. Visiting her father, Cross, Gittes is offered twice what Evelyn is paying him to find the girl her husband was with for Cross. Though genial and intelligent, Gittes realizes the old man is dangerous and locks that away in his mind. Going further into the case, things begin to cloud, not making any sense, and Jake realizes Evelyn is not being straight with him, she is holding something back. When he confronts she again lies and he slaps her, again and again finally telling him the truth about the girl Cross wants. She is both Evelyn’s daughter and sister, as Noah raped him when she was a girl. With mounting horror, Gittes realizes the nightmare he was crawled into. Mulwray, doing the honourable thing had married Evelyn to protect her from her brute of a father.

Arranging for the girls to flee to Mexico, he asks Evelyn and her daughter to meet him in Chinatown at the home of her Chinese butler. Before he goes to the girls he lets Cross know he knows everything, about the girls, and most of all about the scheme to irrigate the places he wants to sell, corruptly making millions. Knowing he is caught Cross has his bodyguard remove evidence from Jake and at gunpoint drive them to where the girl and Evelyn await. The police are waiting and Gittes is detained, but Evelyn shoots her father when he approaches her and she attempts to drive away with her child, Katherine. The police shoot at the car and hit Evelyn, the horn blasting through the night and the child screaming. Cross approaches the care and sees the carnage of his actions, his daughter dead, shot through the head and his granddaughter/daughter terrified of him. 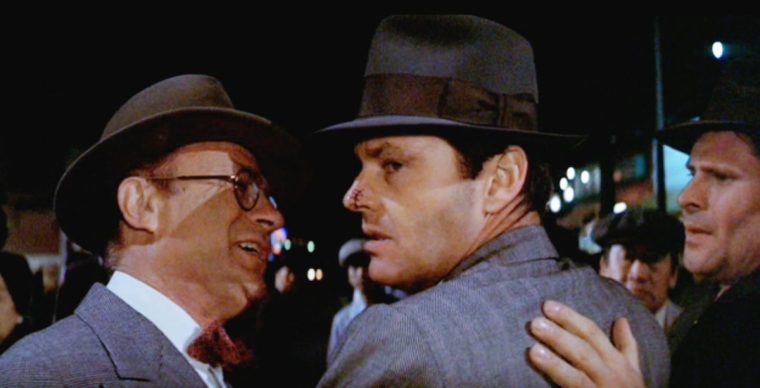 Sadly, Gittes walks away with his friend saying to him “It’s Chinatown Jake”, and we know Jake has had nothing good happen in Chinatown. Gittes has learned that under the veneer of beauty that is California lurks darkness, and the deeper one digs the uglier that darkness becomes. Worse, he knows because of who he is and his money, Cross will get away with it, he will get away with it all.

Jack Nicholson was at the height of his fame in the mid-seventies, the finest actor on the planet and among the greatest movie stars we had. Nicholson walked that line carefully, but he was always an actor first. Here as Gittes, he was brilliant, a smart man who thinks he is one step ahead of everyone, though he has no idea the swamp he is trying to move through. Rape? Incest? Neither had occurred to him and when they become truths, he realizes then he is in over his head. The money he finds can buy anything, and as Cross told him when a man is pushed to his limits he will do “anything”. In the forties, the Gittes role would have been portrayed by Humphrey Bogart, and Nicholson gives the role the right colour to suggest something about Bogart under the exterior. World-weary, having seen some ugliness in the world and humanity he approaches each case cautiously, making the mistake with this one with getting personally involved. The performance is among the most courageous of his career because much of it is performed with his nose in various stages of bandaging, something very few actors would possess the courage to do. With previous Oscar nominations for ‘Easy Rider’ (1969), ‘Five Easy Pieces’ (1970) and ‘The Last Detail’ (1973) this appeared to his year. Walter Matthau quipped the only sure thing of the night was Nicholson as Best Actor. But everyone in the building was stunned when TV veteran Art Carney won Best Actor for ‘Harry and Tonto’ (1974), besting Nicholson and Pacino, both more deserving of the win. Nicholson would win the following year for ‘One Flew Over the Cuckoo’s Nest’ (1975) but Pacino would have to wait until 1992, winning for his bizarre, over the top work in ‘Scent of a Woman’ (1992).

Faye Dunaway might have given the finest performance of her career as Evelyn, a brittle, chilly woman living a lie and terrified it might come out, but more terrified her father will get his filthy hands on her child. The terror she feels about exposing the incest is clear in the scene where she is repeatedly slapped, telling him between each strike, “She’s my daughter…my sister…my daughter…she’s my daughter AND my sister” before breaking into sobs and telling him the truth. Fragile, about to break apart at any moment it is a difficult superb performance. Dunaway could always portray a woman on the edge, but this goes beyond anything she ever did. Though Jane Fonda was offered the part, Polanski insisted on Dunaway, believing Fonda would never be seen as weak or broke, she projects too strong a presence. The willowy Dunaway was perfection as Evelyn, teetering on the brink of hysteria throughout the film. 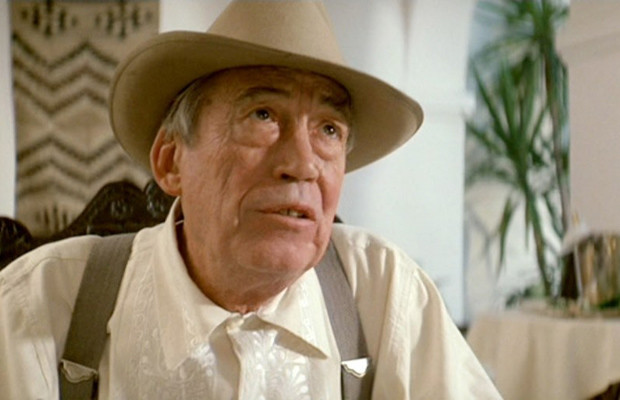 John Huston was an interesting choice as Noah Cross, better known and celebrated for his work as a director and writer, but perfect. This is the man who created the film noir on film with ‘The Maltese Falcon’ (1941) and had always been a fine actor. As the cackling old Cross, he is like evil incarnate, a wrinkled old demon who looks like his corruptions have drained the life, any goodness out of him. It is a spectacular performance, one of the great screen villains.

Among the eleven Academy Award nominations, the film received were Best Picture, Actor (Nicholson), Actress (Dunaway), Director (Polanski) and Screenplay (Towne). Nominations for Jerry Goldsmith’s haunting musical score, the perfect Art Direction which recreated thirties Los Angeles, Sound, Costume Design, Cinematography and the perfect Film Editing rounded out the eleven. At the Golden Globes Chinatown was named Best Picture (Drama) and won Globes for Jack Nicholson, Polanski and the Screenplay often cited as one of the greatest in Hollywood history.

Widely celebrated, a sequel finally came to us in 1990, the second of what had been written as a trilogy. ‘The Two Jakes’ had been back and forth before Jack Nicholson agreed to direct the film as well as portray the lead. Though an interesting look at what happened after, especially the manner Gittes tried to protect Katherine, the girl, the film lacked the artistry of Polanski and was nowhere near as dark.

It remains the single greatest example of the film noir genre ever made.