Has 2022 been a great year at the movies? Sometimes. Like most years there have been a handful of great films, some really good ones, and as usual more bad […]

Has 2022 been a great year at the movies? Sometimes. Like most years there have been a handful of great films, some really good ones, and as usual more bad films than good. Choosing the year’s best films is always a pleasure but a job I agonise over. My first shortlist was thirty-one films, but I did narrow it down to ten, a very tough task. It wounded me not to include the action film that towered at the box office ‘Top Gun – Maverick’ because it was everything a film should be, nearly.

Aubrey Plaza?? Sign me up, I love this girl. Her range is exceptional and when challenged she rises to the occasion. She played a psychotic hit woman on Criminal Minds a few years back and caught my attention and I try to see everything she does. Here she is out of work, bored out of her min Emily stumbles into a meeting where the people claim she can make a lot of money fast. Oh, it’s against the law, but she doesn’t care. And she turns out to be good at it. Plaza is confident as ever, even when in danger, even when getting smacked around, and you can see the wheels turning in her head all the time. Brilliant performance in a film that might otherwise be forgotten. 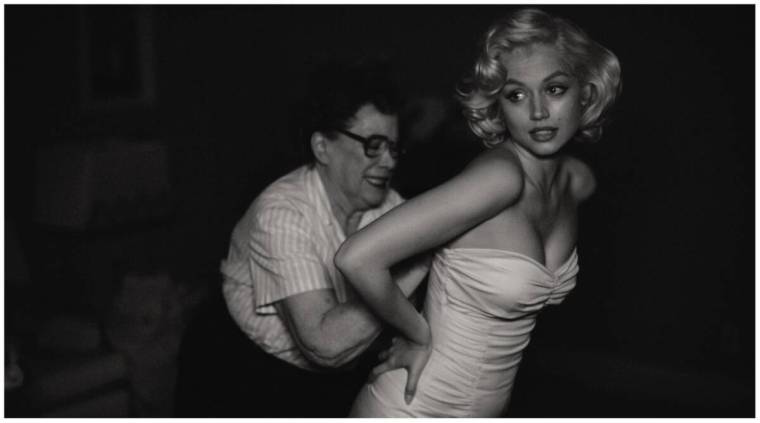 Say what you will about Andrew Dominick’s Blonde it is still the finest exploration into Marilyn Monroe we have on film, and Ana de Armas is spectacular as the star. This is not an imitation but a fusion between actress and character, similar to what Robert De Niro did in Raging Bull (1980), she goes so far under the flesh of Marilyn that we lose the actress. She spent her entire life a victim, but a very wily one who knew what she had to do onscreen t be Marilyn Monroe, the greatest role she ever played. De Armas captures the haunting fragility of the woman, the wobbly mental illness, the deep insecurities, the daddy issues, and yet equally the bombshell sex appeal of the actress.

Antoine Fuqua directed this searing exploration of slavery in and around the Civil War bolstered by a stunning, towering performance from Will Smith. He who slapped deserves an Oscar nomination for his extraordinary performance as a slave who escapes and runs through the swamps and backwoods of the Deep South, battling alligators, snakes, and filth and charging dogs on his scent to get to freedom. It is a great physical performance from the actor, and he throws deep-felt emotion with it as well. Credit where credit is due, Smith is miraculous in the role, inspired by a famous photograph of a slave named Peter showing his horrific scars, left by years of abuse and whipping. Ben Foster is frightening as the man giving chase, his belief he has the right and entitlement to do so horrifyingly.

7. THE BANSHEES OF INISHERIN – Directed by Martin McDonagh

In the finest performance of his career, Colin Farrell is superb as a bewildered young man who cannot figure out why his long-time best friend has, literally overnight, turned against him. No rhyme, no reason, “I just don’t like you anymore”, Merging drama with comedy director-writer Martin McDonough the film is a biting human tale of friendship, and longing, with moments of deep melancholy. Farrell is superb and he has been before, but never like this. And the great Gleason, so often forgotten as a fine actor, is his equal through the film/ Kerry Condon is a wonder here too. Just a superb work

6. AVATAR: THE WAY OF THE WATER – Directed by James Cameron

It has been over a decade since audiences first experienced Pandora for the first time, but I am thrilled it is as great as it is. Not good, but great. A massive sprawling adventure across the land and beneath the oceans of the planet, this might be the greatest of adventure films. Cameron plunges us into Pandora where once again, the Nav’vi are trying to save their beloved planet. With stunning visual effects, breathtaking cinematography and a superb score, the film is quite remarkable but again Cameron’s narrative is weak. Doesn’t matter, the imagery overwhelms.

Yes, it is divisive, and yes, it is a fast-paced hell ride through early jazz-era Hollywood, but I defy anyone not to have a helluva time watching it. An electrifying, hugely energetic fueled joy ride through Hollywood when the city was still growing, when alcohol flowed liberally, cocaine was piled in mounds for the partygoers and sex was an entertainment sport. Margot Robbie is Nellie, a star before she becomes a star, a legend in her mind and of her own making. Never has Robbie looked so positively carnal as she does here, and she knows it. Brad Pitt is outstanding as a silent screen star about to fade due to sound, and Roney Maguire is sensationally bizarre and as a giggly, twisted and very dangerous gangster!!! Babylon is wildly alive on speed and MOVES like a piece of jazz on speed.

Sarah Polley returns to directing and writing after a long absence in which she struggled with a potentially career-ending brain injury. Tenacity and belief in herself brought her back and we are the better for it. Polley both directed and wrote this powerful film that speaks directly to the #MeToo Movement, the Harvey Weinstein scandal, and the role of women in general in Hollywood. In a religious community not unlike the Mennonites, a group of women gather in a barn to discuss the abuse they have been enduring for years at the hands of the men in the village. Women have been abused and raped and it is all just fine with the males, who blame the assaults on ghosts or the devil himself. Some of the women are raging with blind anger, and others ask the logical question, where would we go? A talky film, Pilley focuses on the fine performances of Rooney Mara, Claire Foy (brilliant), Jesse Buckley (even better) and Frances McDormand in a small vital role. Very much an ensemble piece, Women Talking is beautifully acted and directed, and the writing will make you swoon. Welcome back Sarah, we were missed.

In Rodd Field’s electrifying first film since Little Children (1996), Cate Blanchett gives a towering performance of world-famous conductor Lydia Tarr. Arrogant, self-absorbed, vain, pompous and terse, even cruel, she is easy to dislike, and many do, but then she stands before an orchestra she makes magic happen and no one can deny that. This might be the most physical performance the actress has ever given as she throws her entire being into her conducting like a rock star, and her entire heart and soul are on display for all to see. She is never less than astounding, and Field realizing he has lightning in a bottle turns the camera on her and unleashes the force that is Blanchett. Oscar number 4 is very likely.

2. SHE SAID – Directed by Maria Schrader

A brilliant authentic look at how the two New York Times writers, Jodi Kantor (Zoe Kazan) and Megan Twohey (Carey Mulligan) exposed the long-rumoured sexual allegations towards Miramax head honcho Harvey Weinstein, essentially one of the most powerful men in movies. These were rapes and flat-out sexual assaults, and if the women did not comply they were banned and blackballed out of the business by Weinstein. The two begin slowly with doors closed in their faces, phones hung up and stories of not knowing what they were talking about, but they doggedly keep digging and finally get women to talk and go on the record. Gradually the list builds and finally they have him. They are followed, spied on and threatened but they stand together and the Times behind them to bring this monster down. One of the great films about news reporting She Said stands alongside All the President’s Men (1976), Zodiac (2007) and Spotlight (2015). Beautifully directed by Maria Schrader and acted with sensitive power by the two leads and fine supporting cast, it was a pleasure and privilege to experience. Intelligent, sharp and brilliant.

1. THE FABELMANS – Directed by Steven Spielberg

Steven Spielberg’s warm wonderful film about his youth and how he became Steven Spielberg does not shy away from the difficult moments. His mother’s adultery with his father’s best friend is there, the messy divorce, and his father’s demeaning his love of cinema as a “hobby”, all could have been obstacles, but instead, he used them as escapes to make his beloved films. Michelle Williams is luminous as Mitzi his very unique mother, who may or may not have been bipolar, Paul Dano is superb as his down-to-earth, grounded father, never a good match for the free spirit that Mitzi proved to be. Judd Hirsch is terrific in about eight minutes of screen time as arts loving Uncle Boris, the highlights of a superbly acted film. Watch closely and you will catch several scenes that we find in Spielberg’s great film, not exactly, however, but you will know them when you see them. And that final encounter with legendary John Ford (David Lynch) is breathtaking. The greatest of one generation speaking to a boy setting out to become the greatest of his generation?? Incredible.

What were your favourite films of the year 2022? Do mention them in the comments section.

Posted on 1 month ago 0 By thecinemawalaofficial Best Of 2022 Posted in Best Of 2022 Tagged #Avatar The Way Of Water, Babylon, Best Films Of 2022, Featured, She Said, Tar, The Fabelmans, Women Talking