We live in a country where being a woman is a ghastly crime. Here, being a woman means to be objectified, to be told what to wear and to be […]

We live in a country where being a woman is a ghastly crime. Here, being a woman means to be objectified, to be told what to wear and to be ogled at. It’s an altogether different matter that the same set of people have different rules for women at home and women outside. We’re told right from the childhood to perceive women as the weaker gender and as we grow up, we take the weak and turn it right into oppressive. We have Nirbhayas because we tend to “educate” them about staying late at night and we gloat in glory when we teach them the “lesson”.

Yes, we live in a state of acute despair and ladies, this is not the country for you.

NH10 puts a mirror right in front of our faces and shows us the appalling nature of our country for women. Before you think it’s another “India’s Daughter” and make cringe faces, be assured it’s not. It’s not a social commentary on the state of women and it’s definitely not preachy. What it is, is really a grim and gory take on a weekend trip gone wrong. Sadly, it’s true in each and every sense.

Meera and Arjun are a happily married working couple, who decide to take a weekend trip to the outskirts of Delhi-Gurgaon border. Due to an earlier nerve-racking and disturbing incident on the road, Meera gets a handgun for self-protection. On the way to their weekend getaway, they get entangled in a situation, where they eventually become witnesses to an honour killing of a couple. In turn of events further going awry, Arjun kills one of the goons and soon it becomes a kill em’ all fest. How things end from here, forms the rest of the story.

Violence serves as the main weapon employed by the director Navdeep Singh. Well known for his version of Chinatown, the ‘Manorama- Six feet under’ director puts the brutal and heinous nature of the Khaps in a palette and colours it blood red. Here you’ve the antagonist and his bunch of cronies hitting a young boy mercilessly with a rod, Meera stabbing a policeman in his eye with a pen and the village sarpanch slapping her daughter-in-law for failing to obey her words. Here, the violence effectively drives home the point that beyond the B.R Ambedkar written constitution, there lies a different country where the law of the land is the only law. Navdeep weaves a tale where every frame is eerie and often has danger lurking in its corner. While setting up the story, right at the beginning, he gives us a montage of Gurgaon’s skyliners and malls and when everything seems alright in the land of urbanization, suddenly he shatters it with an incident when Meera gets attacked by a gang.

By upsetting the central characters, he installs different emotions in us and soon we get to see contrasts when the same character who refused to help a girl in distress, ends up to be in the exact same position, sometime later. Here we get to see the high-handedness of city bred people towards the general villagers and also the sniggers of the villagers towards these motor bound, cigarette smoking city dwellers. Ugly truths behind the honour killings, the general apathy towards women in swanky offices as well as backward villages, the patriarchal dominance even of the women-led village, one by one event comes out tumbling to the horror of the viewer and to give the credit where it’s due, Navdeep gets it, bang on!

Anushka Sharma gets to play the lead role of Meera and she does it effortlessly. It’s a welcome break from her oft-repeated bubbly and chirpy roles of recent and reminds us of the freshness of Shruti Kakkad of ‘Band, Baaja, Baarat’. Evolving from a hapless woman to an I-spit-on-the-grave kinda ruthless bitch, Anushka does it with aplomb. Also credited as one of the producers of the movie, an extra tip of the hat goes to her for choosing this script. Neil Bhoopalam is good as the city slick Arjun and we wish to see more of this wonderful actor. Another ‘Shaitan perhaps ?? The chief antagonist Darshan Kumar, (of ‘Mary Kom’ fame) is murderous and savage. He breaks the mould from playing a wife supporting husband in his first film and portrays a despicable, wife bashing character. Surprise of the pack is veteran actress Ms Deepti Naval who shocks the audience as an atrocious and sickening sarpanch with a deeply rooted patriarchal mindset. More power to this wonderful lady. The assorted cast is very good, particularly Ravi Jhankaal as Mamaji. 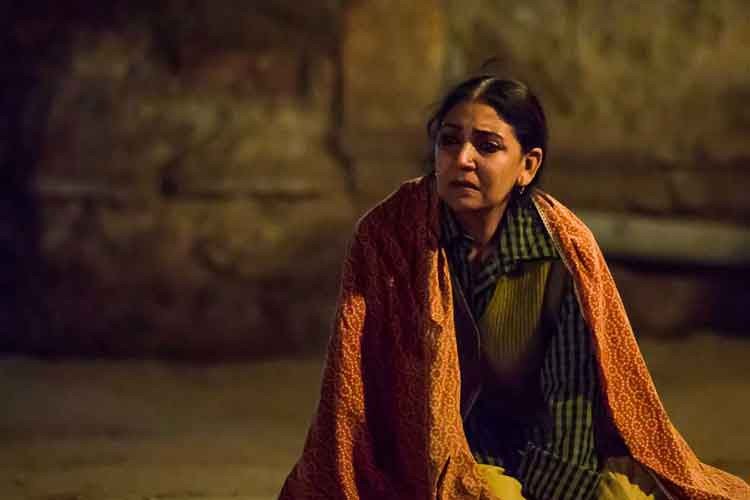 Well directed and well shot, this movie has very few letdowns. Rushing towards the ending, the movie gets stuck in some abrupt slack or so do I felt. Call it nitpicking, but in an edge-of-a-seat thriller, usually, the movie runs in breakneck speed and towards the end, I felt the movie to be slowing up a little but that’s only an observation. With a run time of 115 minutes, thanks to the taut editing by Jabeen Merchant, the movie is effective enough to have cringeworthy faces. The stark difference between urban India and rural India is well captured through the lenses of Arbind Kannabiran.

NH10 is a story that can happen to any of us and is really, really scary because it’s true. A must watch !!!