Calcutta, 1942. The world’s political and economic structure had come down to the outcome of the great war. On the grander scale, it was the allies against the forces of […]

The world’s political and economic structure had come down to the outcome of the great war. On the grander scale, it was the allies against the forces of the axis. On the grassroots level, it became people vs people. Men, women, children were getting killed, their livelihoods lost, properties bombed. With this backdrop, grand plans were being hatched to get India’s independence, in lieu of their support towards the allies. A faction broke away to create a separate army of sorts, with the help of axis. It was chaos all around. In this state of anarchy, when a certain Ajit Banerjee’s father seemed to be missing, nobody cared, nobody bothered. But for him, it meant closure. All he wanted to know was, what had happened to his father? After running from pillar to post, someone told him about a guy, who might be able to find his father. Might be, cause he might very well not give a damn until the missing man is a blackmailer, drug dealer or wait, is actually murdered!

Mr Dibakar Banerjee takes one of the most loved detective characters of India, nee Bengal and gives him a “Shaken, not stirred” introduction to the modern cinema-goers. A rookie, bumbling, a little self-obsessed, arrogant young man of 24 years and 2 months (Hell yeah, I noted !), how did he start it all? ‘Detective Byomkesh Bakshy!’ is the origin story of one of the most celebrated truth-seekers of this country.

Set during WWII,  the time when Calcutta was constantly getting bombed by the Japanese, Byomkesh moves into Mahamaya boarding house where Ajit’s father used to stay. He starts looking into the little clues, the finer details and soon he realises a much bigger game is being played where everyone is a mere pawn. The deeper he gets into the mud, the redder it becomes. Dead people, drug peddlers, mysterious women, freedom fighters and the shadowy character of Yang Guang, who looms over Calcutta and threatens its existence. How Byomkesh deduces one of the deadliest plans ever made, forms the rest of the story.

To give the credit where it’s due, Mr Banerjee gets it, bang on! It’s really difficult to create an origin story when there are several Byomkesh movies being made and most of them are true to the original source material. To be honest, it’s an absolutely fresh re-telling of the character, an entirely new origin story. Though the protagonist later in his life, becomes one of the most sought after truth-seekers, he must have been a novice, at some point in time. Mr Banerjee gives the character the time to grow, makes him fail where he starts to learn from his own mistakes and finally he adds those little touches which bring authenticity to the entire set up. Loosely adapted from the original story “Satyanweshi”, Mr Banerjee gives it a major twist while finally creating the arch nemesis for Byomkesh,  the Moriarty for his Sherlock. This is the area, in which Mr Banerjee deserves all kudos. He creates a man who matches Byomkesh step by step, or to be accurate, more cunning, more deceiving and more deadly than he can ever imagine. The most ardent Sherlock fans would admit that Sherlock is in awe of Professor Moriarty who is both intelligent and dreaded at the same time. I shall not reveal the character’s name but please go watch this man in action. A revelation in himself, at times he will remind you of late Heath Ledger’s Joker. 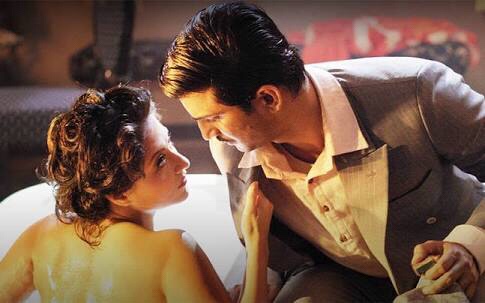 Sushant Singh Rajput is steadily making a strong case for himself in the industry. A live wire performer, he brings a unique flavour to the character of Byomkesh which always have been portrayed as a “Bangali Bhardalok” (Gentleman). Look at him jumping with joy when he deduces a murder! (Khoon hua hai, Khoon hua hai… !! )Anand Tiwari as Ajit Banerjee, the Watson to this Sherlock is a treat to watch. A veteran of comedies such as ‘Go Goa Gone’ and ‘Aisha’ and that famous Sex Education video on Youtube, he excels in his scenes. He and Sushant make a wonderful duo and we wish this pair would create magic as Byomkesh-Ajit in future. Neeraj Kabi, of ‘Ship of Theseus’ fame, is a chameleon and literally burns the screen with his acting prowess. No more questions asked, just watch him in his act. Truly, a bravura performance! From the assorted cast, the newcomer Divya Menon looks ethereally beautiful as Satyavati and does extremely well. Meiyang Chang is effective in a small role and so are the others. A special mention goes to the bold Swastika Mukherjee as the femme fatale Angoori Devi. Crafted specifically on the lines of Mata Hari, this character is pivotal to the storyline and Ms Mukherjee brings all her experience to this role and does it with panache! Some more backstory would have done wonders to her role.

Shot stylishly, the only issue that the audience might have is the slow pace in which the story unfurls. But for that, I can suggest only one solution. Immerse yourself in the frames, let the nostalgia take over because each frame has a story to tell. It speaks of a forgotten era, a world that has been lost to time. Trust me, you’ll get swooned by this heady, potent cocktail called Calcutta and somewhere down the lane, you’ll meet this dhoti-clad young man, who tries to unearth a sinister plan of deceit, death and mayhem.

Saradindu Bandyopadhyay would have been very proud today…