Skip to content
Ghayal Once Again: Sunny is Back..I was the victim !!!
Bollywood

Ghayal Once Again: Sunny is Back..I was the victim !!!

Ghayal Once Again is an assault to cinematic senses. It reeks old school film making. The treatment meted out is so rudimentary, complimented with pedestrian level of acting, that it […]

Ghayal Once Again is an assault to cinematic senses. It reeks old school film making. The treatment meted out is so rudimentary, complimented with pedestrian level of acting, that it makes that Arindam Choudhury movie look like vintage material. In order to appeal to the Gen X, there is a considerable amount of tacky VFX shots which includes an animated helicopter flying inverted and then dumping fuel to crash into a building that suspiciously looks like Antilla. Though the movie runs for a little more than 2 hours, it feels like an eternity and any trace of life inside the viewer, is periodically sucked out.

The movie starts with a flashback of the original Ghayal where the protagonist Ajay Mehra fought the system to take revenge for his brother. Cut to 2015, he’s a loner working tirelessly to provide justice to the innocents. Soon the movie plays out montages of the changed scenario of the society and frame by frame many characters are introduced. Some teenagers, a ruthless business tycoon, his devoted family and the list goes on exhaustively. After a routine tirade of introductory song and dance, the movie  goes to its actual track when the teens accidentally record the footage of Mr. Joe (an associate of Ajay Mehra) getting killed by the tycoon’s enraged son. The tycoon sets on a mission to eradicate all proofs by engaging the entire police force of Mumbai and his personal mercenaries after the kids. Rest of the story forms as Ajay Mehra bashes every skull in his way to protect the kids. 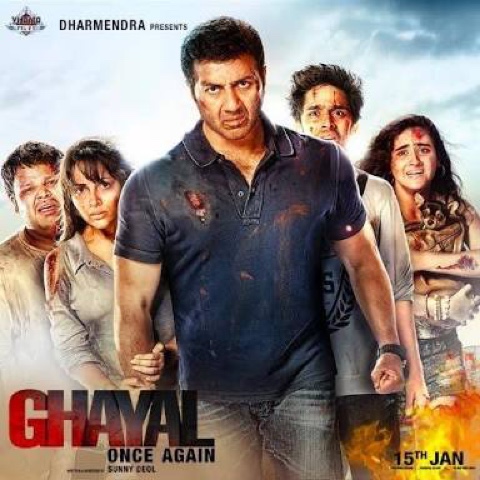 It’s painful to see Sunny Deol essaying the iconic character, made so memorable by him in the 90s’. The original had a mass appeal because the story mirrored the situation of the contemporary society. It marked the beginning of Raj Kumar Santoshi of being a powerful story teller which later flourished into the likes of Damini and Ghatak, with Sunny Deol as the sole flag bearer of the ilk. Ghayal Once Again is a pale shadow of his former self; both literally and figuratively. Helmed by Sunny Deol himself, it has an archaic storyline that constantly berates itself with poor direction. Majority of the movie is full of action sequences which goes on and on. The actors are left with no option but ham. Sunny deol himself resembles the giant from the game Clash Of Clans and acts similarly, slow and sloth-esque. Eventually the movie falls flat despite an earnest attempt by Narendra Jha as the primary antagonist. Actors like  Soha Ali Khan, Tisca Chopra and Nadira Babbar take backseat as mediocrity gets into overdrive and makes a mockery of the entire storyline.

Balwant Rai ke kutto.. They must be laughing their guts out..
Even for the diehard Sunny Deol fans, it’s a must avoid.