A septuagenarian John Biswas, who looks like your average grandpa, hauls to the market alone, fixes a defunct fan at home, cooks for his wheelchair borne wife and does mundane regular household stuff. In midst of this normalcy, he holds a terrible secret in his heart. Eight years ago, his granddaughter was abducted and killed. Believing that he failed to do his duties, John diligently goes to the police station everyday to find any new information about it in his equally aged scooter. Every night, he listens to the recorded cassette of the ransom call and thus relives the horror that unfurled eight years ago. All of a sudden, another kid is abducted in an eerily similar manner. To know the rest, you need to watch the movie. 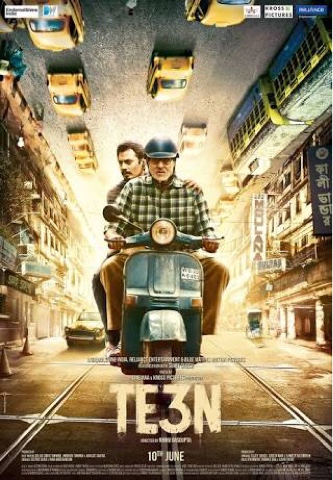 An official remake of the Korean movie “Montage”, TE3N sets it up nicely like a sweetened cocktail. When you guzzle it down the throat , it  starts giving you the high. But as soon the alcohol content is over, you can only feel the syrupy juice and rue that it’s over so quickly. As a viewer you feel cheated when you don’t get to experience the acting chops of Nawaz. A poorly written part and lack of depth of the character makes him one dimensional. As an ex cop turned priest ( whoever thought about this ingenious change of job profile !!), he’s supposed to be a torn soul, looking for redemption. Opposed to this, he looks out of place, makes unfunny snide remarks about marriage and plays second fiddle to Mr. Bachchan. Ms. Vidya Balan shakes off her atrocious act from Hamari Adhoori Kahani and plays her part nicely. From the supporting cast, Padmabati Rao as Mrs. Biswas and Sabyasachi Chakraborty as Manohar Sinha stand out for their respective portrayals.
The only reason you should watch the movie is Mr. Amitabh Bachchan. Time and again, the man reminds us what a tremendous performer he is. As a grief stricken old man with droopy shoulders, dark circled eyes, a slightly hunched gait of a tired person, he nails his act perfectly. In one word, phenomenal. In one of the best moments in the movie, upon his wife’s remark about the soup lacking salt, he retorts by saying that he might have invented a new recipe !! The movie is directed by Mr. Ribhu Dasgupta who is earnest in his efforts. It’s difficult to tell a story using distorted time lines but being the USP of the movie, that comes out quite nicely. Cinematography is excellent as it captures the bylanes of the old world Calcutta and not Kolkata as we know it now.
TE3N is as ambiguous as its name goes. It suffers from all those familiar issues that a weakly written thriller usually does. But what it manages to do, is to keep the viewer glued to his chair. A little predictable at times but a tout script helmed by a great actor and an able support cast manages to make this an above average fare.
Alas, with a little more finesse, it could have reached the crescendo of that magnificent opera called Kahaani.