What is the minimum criteria of heading the censor board?   My paltry knowledge of movies suggest that one must explore a plethora of movies in multiple genres, in order […]

What is the minimum criteria of heading the censor board? 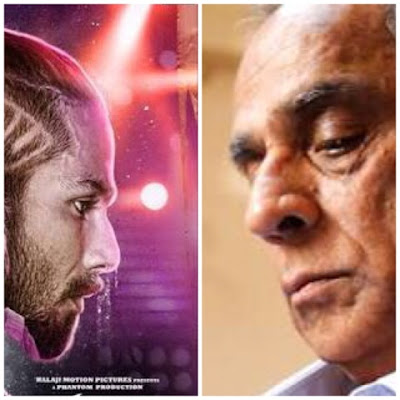 My paltry knowledge of movies suggest that one must explore a plethora of movies in multiple genres, in order to understand the different sensibilities among multiple races and creeds that live in the country, thus to be able to rate movies accordingly. Movies are, in a way, mirror of our own selves. Often, they seem mirages but sometimes they speak ugly truth which seems to be unfathomable. If you can ignore the usual staple of HouseFulls, Dilwales and Kicks, there will be hidden gems like Masaan, Sairat and Court which are true cinema. And as the flame of the forest and the weed co exist, the humongous blockbusters should be churned out regularly so that the true form of cinema can flourish through these minor gems.

Our beloved Nihalni sahab has the most distinguished and much enviable resume of producing films such as Aankhen and Andaz which boasts of embellishments such as Angna Main Baba, Duare pe Ma.. And Main Maal Gaadi tu dhakka laga.. For people who might not have been fortunate enough to have witnessed such travesties of life, I urge you to click on the link. Good old wikipedia states some 15/16 movies to be produced by the enigmatic man himself. So, for a person of such stature, the only credible piece of evidence to have elevated him as the CBFC chairperson is the campaign video. Upon ascension to the throne, he unleashed his magical scissors to snip anything marginally erring on the sanskari side. Let me produce a sample (courtesy @RajaSen) here, for a recent certification for the movie “The Nice Guys”. Behold the magic – 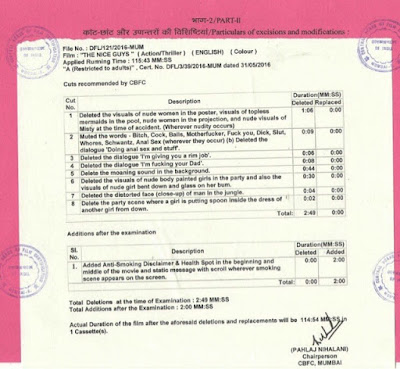 The drug problem in Punjab is rampant. The state, which has seen maximum militancy since its inception, now faces a bigger menace. A report states that the heroin that is smuggled from Afganistan for Rs 1lakh per kg, turns to 30 lakh per kg in transit and sells for Rs 1 crore per kg in Punjab. Approx. 60% family in Punjab has at least one addict. Such is the magnitude of drug abuse. However the state govt. paints a rosy picture of the number of addicts to be in decimals. So when someone comes up with a story that depicts the true state of the devastation that drug abuse does, what did our beloved censor board do? They suggest 89 cuts and remove any reference to the state Punjab. Welcome to la la land people !!

Voltaire once said, ” A society gets the criminal it deserves”. Truer words were never spoken !!

P.S – A dear friend came up with this gem, hence I am producing it verbatim.
Barring a few from this list, rest have subjected us to travesties which can put Nihalani to shame or at least be at par. The thing is, our current chairman is a moron driven by political leanings !! 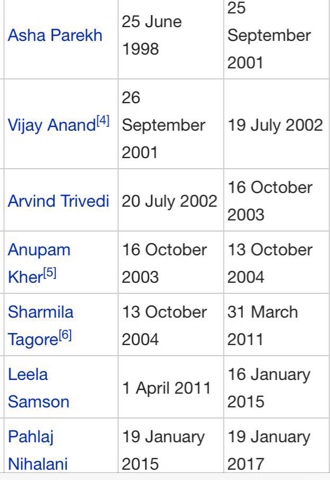