#HappyBhagJayegi-MiniReview #ASRSays 👍👍👍 In times where movies with huge stars sink without a trace, ‘Happy Bhag Jayegi’ comes as a breather. Not that it’s a great film, but what works […]

#HappyBhagJayegi-MiniReview #ASRSays 👍👍👍
In times where movies with huge stars sink without a trace, ‘Happy Bhag Jayegi’ comes as a breather. Not that it’s a great film, but what works for me is the goofiness and the old worldly charm showcased by the actors. Set in a fictional time where moving between India and Pakistan is as easy as moving between two neighbouring states, a runaway bride from India, lands up at the house of the scion of a political family in Pakistan. Following her, her lover, her husband to be and her father also reach there, ensuring mayhem. 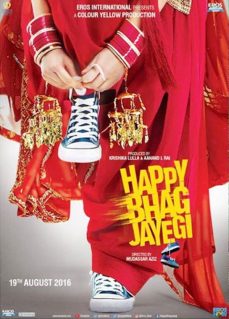 In a role which is tailor made for a Kareena  Kapoor or a Kangana Ranawat, Ms. Diana Penty does well. It’s the assorted cast which keeps the movie in course. The only Deol who can act, does splendidly well and his chemistry with both Ms. Penty and the beautiful Momal Sheikh keeps you hooked. Piyush Mishra brings the house down with his antics and he’s a hoot as ACP Usman Afridi. The writing goes down at times and forced humour springs up but all of that can be forgiven as it gives you a big chuckle at the end. While humour takes centerstage, it’s the underplay of romance which steals your heart.That Madhubala allegory remains my favourite moment.
FYI – Jimmy Shergill’s desire for a bride still goes elusive.