The problem with the Rocky franchise began with a ‘Rocky IV’ (1985), in which Apollo Creed is killed in the ring by a massive steroid fuelled Russian, Ivan Drago, fighter […]

The problem with the Rocky franchise began with a ‘Rocky IV’ (1985), in which Apollo Creed is killed in the ring by a massive steroid fuelled Russian, Ivan Drago, fighter Rocky goes to Russia to train before fighting the Russian, and most ridiculous, Rocky is cheered by the Communist crowd, including their President in attendance, for his courage and grit. Oh not right away, they boo the nasty American at first, but damned if Rocky does not win them over!

And yes he wins the fight.

And then, draped in an American flag, speaks to the Russians (and world apparently) about all of us getting along, not people, nations. We learn a few moments later Rock has suffered brain damage in the fight, yet he managed to give political advice just moments earlier. From there the franchise went steadily downhill. The brain damage in ‘Rocky IV’ was gone by ‘Rocky V’ (1990), in which he loses his wealth and ends up back in Philadelphia. Did Rocky not always have damage to his brain? Was he not always a little punch drunk?

Then, surprisingly, fifteen years after the fifth instalment, Stallone gave us the entirely pleasing Rocky Balboa (2006) which dealt with Rocky after the death of Adrian, quietly running a restaurant, trying to establish a relationship with his son. Not bad, not great but if this was how it ended, ok.

But then, out of nowhere, came ‘Creed’ (2015), an interesting revamping and reboot of the franchise…sort of. Rather than explore Balboa further, this idea chooses to explore the illegitimate son of Apollo Creed, Rocky’s foe and friend. Rocky became a supporting character in this film about the bastard son of Apollo Creed, taken in and raised in wealth by his wife. He becomes a boxer, rises slowly and then approaches Rocky Balboa to train him. Cue famous horns, the running montage, and suddenly son of Apollo is fighting for the championship while Rocky fights for his life with cancer. ‘Creed’ (2015) was a hit with critics and audiences, earning Sylvester Stallone his first attention from the Academy in forty years, a nomination for Best Supporting Actor. Let’s be clear, he deserved to win, he should  have won, the man was robbed.

So with a hit such as ‘Creed’ (2015), there must be a sequel, and the makers of ‘Creed II’, mine from the absolute worst of the Rocky films, ‘Rocky IV’ for their story. WHAT. WERE. THEY. THINKING? Horribly self indulgent, elevating Balboa to a mythical hero, a political animal (Russians cheering for HIM??…in Russia?)…come on, in what universe?

This time young Creed, now recently married, a father to a child with a disability, is the champion of the world, and is embarrassed into fighting a powerful Russian fighter, by the name of Drago (Florin Munteneau). Son of Ivan Drago, the man who killed his father in the ring, sound like a monster movie!  See where this going? Against the wishes of his mentor and friend, Rocky, Creed fights the Russian monster without Rocky in his corner, and gets his ass seriously kicked. Does he learn? Well faster than you can say obvious plot development, a rematch is set but this time Rocky is in Creeds corner. You can pretty much guess the rest, it is not difficult and surprise was never a hallmark of the Rocky, now Creed franchises. It saddened me that the makers of ‘Creed’ (2015) permitted Stallone to have a hand in writing the script because unlike the first it is bogged down with constant cliches and Rocky history. 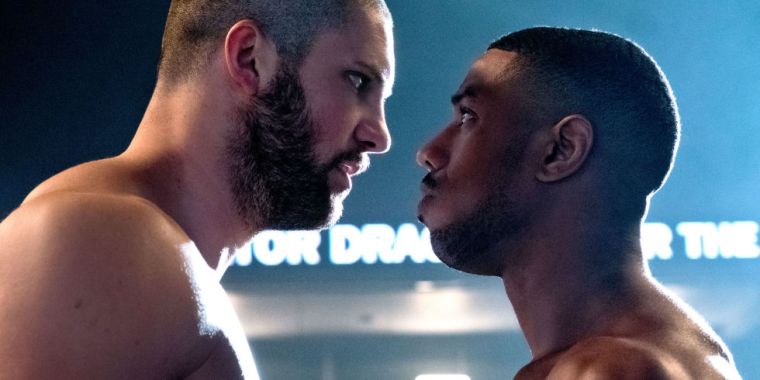 Michael B. Jordan is terrific, again as Creed, going deeper this time, and as a husband and new father he now has more to lose. When hammered the first time by baby Drago, he is told by Rocky not to fight again, but we know he will, he must. Jordan is failed by a script filled with cliches, one might even suggest it feels like another Rocky sequel, without meaning it kindly. Stallone. I like Sylvester Stallone but never have I thought he was a great actor. He can be, in the right role, and does better when he does not have to say much. In the first three ‘Rocky’ (76-79-82) he was outstanding, and as war veteran John Rambo in ‘First Blood’ (1982) he was very good, but then they turned both characters into near mythic heroes, which became increasingly stupid. When Stallone portrayed Rocky as a supporting character in ‘Creed’ (2015) he was brilliant, allowing focus to go on someone else, which seemed to free him to give a fine, deeply moving performance. I believe he deserved to win the Oscar in 2015 for his heartfelt performance but no one will ever convince me ‘Rocky’ (1976) deserved Best Picture over ‘All the President’s Men’, ‘Network’ or ‘Taxi Driver’. Stallone was brilliant as Rocky the first three times, very good the sixth, and superb in ‘Creed’ (2015). 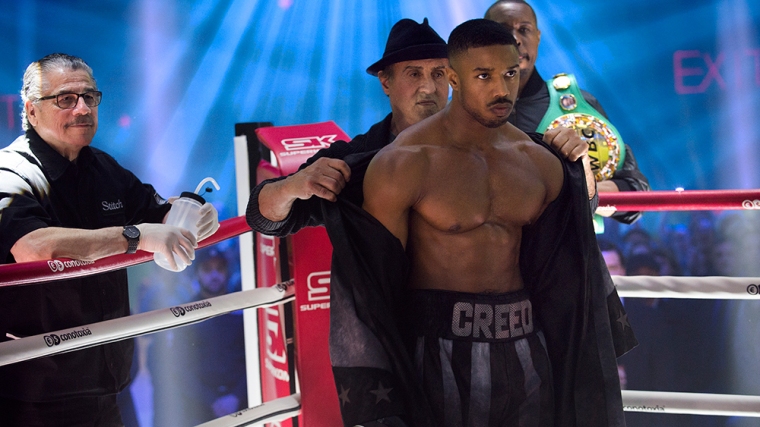 Stallone drops in to speak wisdom filled platitudes, no kidding, every sentence he utters feels like it was ripped off a Hallmark card. When did brain damaged Rocky become so wise? It is like the Scarecow in ‘The Wizard of Oz’ (1939), we have been told he is mentally damaged, he tells Drago broke things that are still broke, yet he is this wise Yoda like character guiding young Creed! It became very silly, very quickly. Dolph Lundgren shows up as Daddy Drago, he still cannot act, and Bridgette Neilson makes an appearance as Drago Jr.’s mom, she can act even less. In fact when compared to Stallone, old Sylvester comes across like Brando. Neither Lundgren or Neilson lend anything to the story.

Like cotton candy, I enjoyed watching it despite the cliches and flaws, aware it is a shadow of the first,  but have not thought about it once since seeing it until writing this.

Where to go from here?

Son of Drago vs. Son of Creed on the Planet of the Apes on the Nightmare on Elm Street Back to the Future…Part Five?

If a piece of shameless propaganda junk like Rocky IV (1985) gets made, why not?