Welcome to Andy Serkis’s Jungle Book. It’s scary as hell, as the all seeing python Kaa begins the tale of the man-cub who was raised by a pack of wolves. […]

Welcome to Andy Serkis’s Jungle Book. It’s scary as hell, as the all seeing python Kaa begins the tale of the man-cub who was raised by a pack of wolves. Nobody here, sings any paeans about the bare necessities of life or stealing honey, dangling up in the air. Life’s brutal in the jungle and Mowgli gets to learn that, pretty fast. His tryst with skilling himself, along with his mentors Baloo and Bagheera, takes him on an adventure that ends with a fateful encounter with his archenemy- Shere Khan.

Rudyard Kipling’s ‘The Jungle Book’ is a classic in its true sense. And director Andy Serkis sticks to that version. If your childhood memory of Mowgli is the sweet Disney animated version, then you’re up for a rude shock. Andy Serkis chooses a dark palate to paint his version of Mowgli, who’s struggles to find his identity between the wolves and men. The film starts off really well with some exquisite shots, great VFX and some cool motion captures, then the curse of the second half gets applied to it and it loses steam.

Individual performances make the movie look good. Christian Bale as Bagheera, Andy Serkis as Baloo, Benedict Cumberbatch as Shere Khan, Cate Blanchett as Kaa are the highlights of the film. But my fav is Tabaqui – the Hyaena, voiced by Tom Hollander. But it is the human characters who take the movie down. There’s a half baked character of Matthew Rhys, who’s a hunter. He appears as a fatherly figure for Mowgli yet rather embarrassingly becomes a villainous character, eventually getting trampled by an elephant. Frieda Pinto is there. Just there, without any dialogues. Mowgli is played by the young Rohan Chand, who does well. 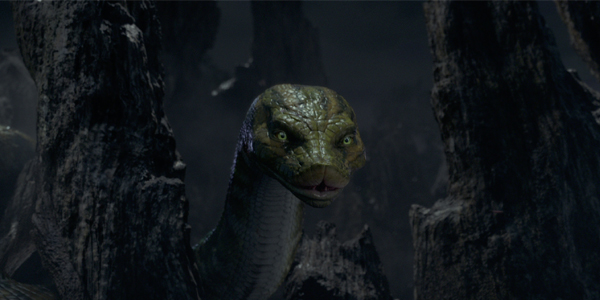 Andy Serkis’s take on Rudyard Kipling’s tale is more accurate than the heavily sanitised Disney versions. However, the same can’t be said about the entertainment factor. Disney’s version are more fun to watch.