With his first film since his Academy Award-winning Best Picture, director Steve McQueen goes as mainstream as he ever has before with this excellent caper film featuring an ensemble to […]

With his first film since his Academy Award-winning Best Picture, director Steve McQueen goes as mainstream as he ever has before with this excellent caper film featuring an ensemble to die for, all who deliver superb performances, a couple Oscar worthy.

When a robbery, led by Harry (Liam Neeson) goes very wrong, killing all the men involved, their widows, each who knows what their men do for a living, areleft in the terrible position of being alone. Veronica (Viola Davis) learns that the money they had stolenbefore it went up in flames, belonged to a very nasty drug lord who wants it paid back in thirty days. If not paid back, he makes it clear his brother Jatemme (Daniel Kaluuya) will pay her a visit. Terrified she finds her husbands plans for the next job and she gathers the other widows together, and makes it clear to them, like it or not they are in on this job. She gathers information, setting up each woman to her part of the job, commanding them with a force that is frightening…she is good at this! But hovering over her is Jatemme, a very scary young man who enjoys terrorizing almost as much as he enjoys killing. With dead, soulless eyes, hyper-violent, he sizes up everyone he encounters, invading their space with his body, bullying and intimidating them with his force of personality.

There are many story threads at work here, like an Altman film, all of them eventually colliding with each other. Longtime Chicago politicians, the Mulligans have been setting up and paying off elections for years, the family filled with corruption. The father, portrayed with blistering anger by Robert Duvall, despises his hotshot son, Jack (Colin Farrell) who is now running for the office his father once held. Though it is out that the old man is corrupt, the young man wants nothing to do with his father’s legacy. That said, he is caught up in the game anyway, like it or not. 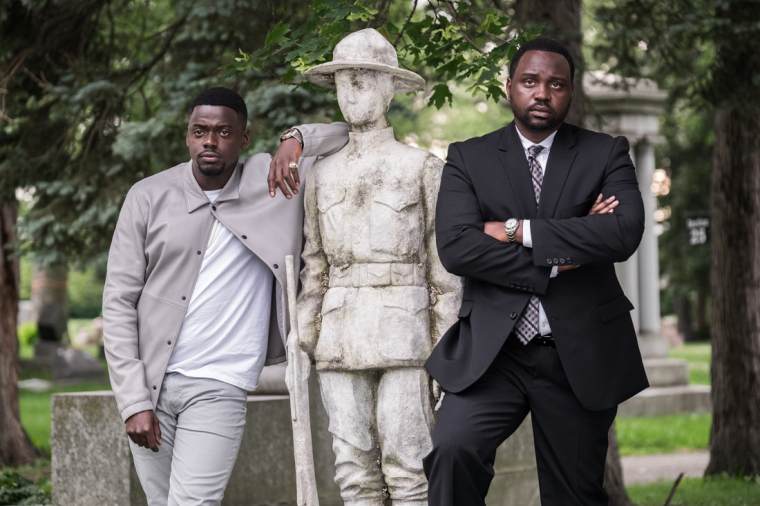 Mobster, drug lord Jamal (Biran Tyree Henry) is also running for office but is saddled with the public image issue, people know he is a criminal. He does not seem to care and is quite willing to erase anyone who challenges him, or rather pass it on to his very nasty brother, Jatemme, always close by a near demonic presence. Each of the widows has a story, Linda (Michelle Rodriguez) loses her dress shop after the death of her guy, unaware he used it as a front, Belle (Cynthia Ervivo) is a hairdresser who looks after kids when necessary and Alice (Elizabeth Debicki) has an abusive boyfriend and psychotic mother who talks her into prostitution. Of the girls, Alice turns out to be the most fearsome, realizing this is her only chance to break free of the world her mother has set out for her.

At the heart of the movie is Veronica who has lost much more than anyone realizes and been betrayed in a way that sickens her. Her dawning realization of that betrayal is heartbreaking, but she is long done being a pushover and quite content to put a bullet in anyone who tries to stop her. Driven, obsessed, terrified, fearless, utterly unstoppable and haunted by her past and what she knows she must do, she is a force of nature.

The two performances that drive the film are Davis as Veronica and the terrifying Kaluuya as Jatemme. It has been a long time since I have seen a villain as vile, as truly frightening as this dead-eyed young man. Asking a young man to do his rap song for him, he gets in close, staring him in the eye, never looking away, and suddenly shoots the kid dead. No warning, nothing, just dance, sing, and then he
shoots him. Watching Kaluuya in the role it is shocking to realize he is the same young actor who was nominated for an Oscar for Best Actor in ‘Get Out’ (2017) the breakout hit last year. Is this really the same guy? His range is astonishing. If not nominated for Best Supporting Actor I will swear the fix is in.

As good as Debicki is she never steals a scene from Davis who is towering in the film, a genuine leader who becomes a dangerous force on her own. Backed against the wall, she must come through, and when the robbery is set in motion everything that could go wrong does go wrong. But it is how she handles that that gives her character that great edge over everyone else in the film. She never panics,
she moves forward, knowing she cannot go back. So focused and fearful is she, we do not see her smile until the job is done and weight is lifted off her shoulders.

Every caper film has a major twist and this one is a doozy but watch Davis face when this one is exposed, she almost expects it, almost knows. What a wonderful actress she is. Normally I am not a huge fan of caper films, they are usually so predictable and dull, but McQueen gives this a razor-sharp edge by allowing the actors to create such well-defined characters. And many of them are intensely dislikable.