A fan’s life is not easy. He has to jostle among rest to secure that golden ticket for the first day first show of the movie. Among hundreds of whistle-mongers, […]

A fan’s life is not easy. He has to jostle among rest to secure that golden ticket for the first day first show of the movie. Among hundreds of whistle-mongers, he goes berserk when his hero appears on the screen. It’s a different thing that the movie may be a poor one but for him, it’s a definite game-changer. He vehemently debates the failing stardom of his idol among his haters and argues like a maniac, when nobody cares for his judgement. When social media is rampantly bad-mouthing the star, he and a bunch of similar thinking people start hate campaigns to malign the contemporaries to bring balance to the universe. He feels terrible every time a rival actors’ movie succeeds. And every time he celebrates, when his idol is awarded as the best actor. Yes, a fan’s life is not easy. But you know what I feel about that fan? I think, a hero or an idol is probably an extension of that fan. The idol is everything the fan ever wanted to be but could not. He feels an unspoken bond, an unyielding attachment to his icon which at times borders on obsession. And hell hath no fury like a fan scorned! Director Maneesh Sharma’s ‘Fan’ is about that one man, an ordinary fan out of countless such fans. A small wish to meet his hero soon turns into heartbreak as he feels betrayed by his icon. A simpleton turns into a psychopath and steps on a mission to destroy his idol’s life.

Shah Rukh Khan, after so many years in this industry, had been doing safe roles which appealed to his romantic hero persona. It’s refreshing to see him flexing his acting muscles after a really long time. In fact, it’s Gaurav, his doppelganger avatar towers over his superstar persona as Aryan. As Gaurav Chandna, he takes his acting chops to a superlative degree. He’s both adorable and heinous as Gaurav. Not that he doesn’t dazzle as Aryan the superstar, but he brings more authenticity to his character as an obnoxious, self-obsessed superstar. This is probably SRK’s best work in recent times and nobody other than him could have pulled this mean feat. The best thing about this movie is Gaurav Chandna. He eats, sleep, talks and breathes his idol. The prosthetics, as well as usage of VFX, do an amazing job on the ageing star, as the doppelganger looks part SRK and part a common man. As Gaurav, the mannerisms, the giggle, the awkwardness to meet his start for the first time, everything is so wonderfully done by SRK that you automatically start rooting for him. The Delhi lingo sounds surreal to the ears and Gaurav plays his part with elan. A tip of the hat to SRK 2.0 for his amazing performance as Gaurav. Rest of the cast is effective with Deepika Amin and Yogendra Tiku playing Gaurav’s parents and Supriya Pilgaonkar debuting as Gaurav’s neighbour. 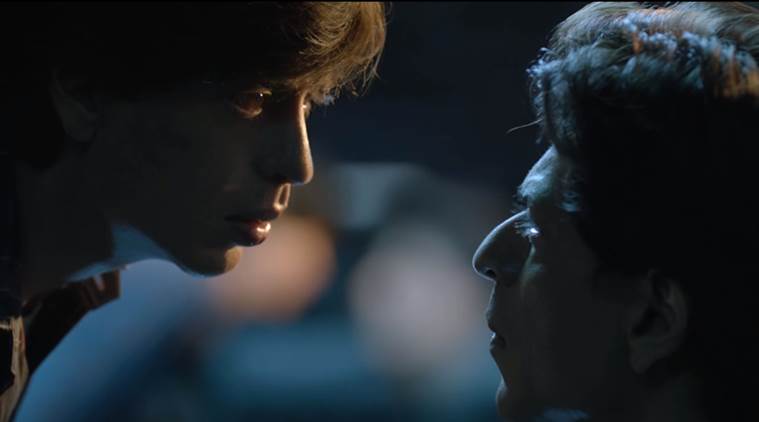 The problematic part of the film is SRK himself and perhaps to some extent the director Maneesh Sharma. While he engrosses fully as his dual persona of Gaurav and Aryan, the camera also captures the self-indulgence that the actor exudes. The second half of the film doesn’t do justice to the electric first half, which is the best of the two. While writing the second half of the story, the director along with co-writer Habib Faisal seems to be in awe of the star Shah Rukh Khan. Poor writing mars the ending, which could’ve been one of the best finales ever. The movie is a tad longer than usual and probably some sharp editing could have done wonders to this tale of a man and his fan. The film ends on a poignant note where the star ponders asking himself the most defiant question…