Hell, yeah !!!  Now that’s what I call a Superhero movie. After the colossal flunk that BvS has been, Civil War is a welcome break from monotonous fare of brooding […]

Hell, yeah !!!
Now that’s what I call a Superhero movie. After the colossal flunk that BvS has been, Civil War is a welcome break from monotonous fare of brooding superheroes. Not that it doesn’t have its fair share of failures, but oh my gosh, look at the story arch that they built !!! Russo brother duo have the audience eating out of their palms and that’s sheer brilliance of film making.
Age of Ultron left blood on the hands of the Avengers. Especially Stark’s. A vulnerable Tony Stark, whose relationship status is best described as volatile, goes through one of the lowest phase of his life. At this time, General Thadeus Ross, last seen in Incredible Hulk, presents the Socovia Accords – The superhero control act. Tony sees it as a necessary control measure for the enhanced human beings like him. He believes, that one cannot be the best judge of situation while holding the bomb. And that’s where the ever resilient captain Steve Rogers refuses to sign the dotted lines. And just like the civil war of the yore, two diametrically opposite sides of the coin come face to face. Super versus Super. Brother versus Brother. 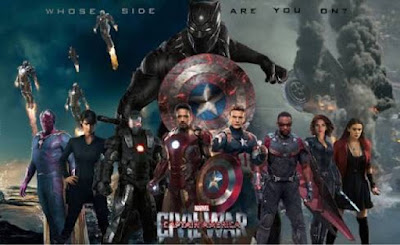 This is what Age of Ultron should have been. Civil war becomes the worthy successor of the Avengers, though it misses two of its important heroes, Thor and Hulk. But it makes more than amends by including cameos from Ant Man, Hawk Eye and that kid from Queens with a lot of heart!! Wait, Did I Say, Spidey? Whoops !! Spoiler Alert !!!
Civil War has every ingredient for a perfect recipe. And boy, does it come good or what!!! Perfectly choreographed action sequences with well timed dialogues blow the mind completely away. The problem where the script starts to go awry is the multiple introduction of the new inductees of the group. That’s the only time the script starts to limp instead of galloping. The emotions run high between the two protagonists, brother turns against brother and those who are loyal to the system, are asked to prove their loyalty.
Robert Downey Jr and Chris Evans are on the top of their games. Scarlet Johansson is on the verge of getting her own solo movie. Chadwick Boseman and Paul Rudd are brilliant as Black Panther and Ant Man. Spare a thought for Daniel Bruhl as Colonel Zemo. Watch it to know more about him. The rest of the avengers are good in their respective roles.
Civil war is everything that BvS is not. All I want to say is…..
Watch and learn Warner bros. .. Watch and learn !!!