A decorated navy officer finds his wife having an affair with a casanova. In a fit of anger, he kills him by firing three rounds from point blank.  Originally acquitted […]

A decorated navy officer finds his wife having an affair with a casanova. In a fit of anger, he kills him by firing three rounds from point blank.  Originally acquitted by lower court, he gets convicted in the higher court but miraculously gets pardon from the governor. He moves abroad with his family and nobody hears from him.
Boring, isn’t it ? Now read this –
A decorated navy officer has a tiff with a scheming scumbag who takes his revenge by seducing the officer’s wife. The officer kills him as he turns out to be a part of a bigger nexus to defraud the nation. Crowd pulls its punches behind this patriot and he gets acquitted in the court of justice with much fan fare.
Perfect !! 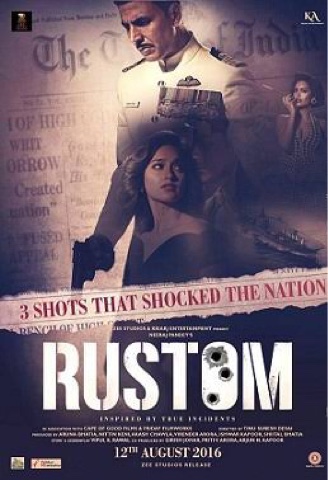 Mark Twain once said,
“Truth is stranger than fiction, but it is because Fiction is obliged to stick to possibilities; Truth isn’t.“
Rustom is everything that Nanavati isn’t. Apart from the three shots, the media blitzkrieg around it and the acquittal, rest everything is made up, concocted and well told to entertain the viewer. Sadly, in a hoard of entertainment, the facts never emerge and that remains my grievance in a movie that otherwise never fails to entertain. Akshay Kumar excels, Illeana looks pretty, Esha Gupta bares as much as possible, veterans like Usha Nadkarni, Sachin Khedeker, Pawan Malhotra and Kumud Mishra waste their talent and rest of the cast paint themselves in tint of sepia, which by the way is the colour of Bombay of the fifties.
Watch it and you will be entertained.
Start looking for facts and you are doomed.
P.S – If you’re really interested to know what exactly happened , read this –
http://www.firstpost.com/wp-content/uploads/2016/08/TabloidtheCity.pdf