Right before a high voltage India vs Pakistan cricket match, which incidentally is a final of an unknown tournament, at an unknown location somewhere in the middle east, India’s ace batsman Viraj is abducted. To rescue him, India’s top cop flies to a city that suspiciously looks like Dubai but nobody mentions that. Sometime later, a chase sequence occurs in a city named Al Jabal but the location is Ferrari World at Abu Dhabi.
But who cares?
Just do, Jaaneman Aah !!! 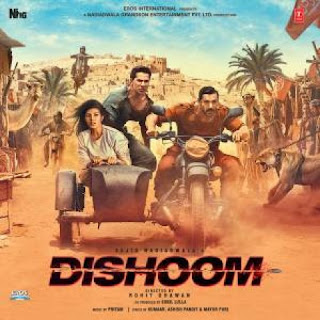 Like the lyrics, absurdity hits the top of Himalayas with Dishoom. Neither the director nor the actors take themselves seriously in this mad caper. Even the writing is sloppy. But one man takes it to another level. That’s Mr. Varun ‘the Govinda reincarnated’ Dhawan !! Unbeatable comic timing and a quirkiness par above, he is fabulous. John Abraham as the Rock version of his character is unsurprisingly wooden and only looks good in Varun’s company. It feels good to see Akshay Khanna back in action as the chief antagonist. Jacqueline Fernandez is decent as the eye candy and does not have much to do except the usual fare.
Watch out for a hilarious cameo from Akshay Kumar and even funnier voice cameo from veteran actor Satish Kaushik.
But even if you don’t like the movie, who cares ?
Just do, Jaaneman Aah !!!
#ASRSays – 👍