In the midst of two wedding processions going to the same house, with two grooms intending to marry the same girl, when Mr Manoj Sharma was ready to lay down his life for Ms Tanuja Trivedi, all of us were moved to tears. And so was she. Four years ago, we all came back home with the happy ending of Tanu marrying Manu and living happily ever after.

Nope! The 7-year itch came up to haunt them early and after 4 years of ‘marital bliss’ where the last sexual encounter was on the auspicious occasion of “Bhai Dooj”, Tanu and Manu are on the brink of separation. Would it be curtains on this couple? Would it be another love story going astray on the pedestal of marriage? ‘Tanu Weds Manu’ ‘Returns’ to answer these questions and does with much aplomb.

The great Charlie Chaplin once said, “Life is a tragedy when seen in close-up, but a comedy in long-shot…”. Director Anand L Rai serves this message through this wonderful movie. A true Bollywood director in the footsteps of stalwarts such as Hrishikesh Mukherjee, Manmohan Desai and that showman Subhash Ghai (before he gave us ‘Yaadein’, ‘Kisna’ and ‘Yuvraj’ !! ouch, those still hurt ), he loves Hindi cinema. Proving his earlier ‘Tanu Weds Manu’ and ‘Ranjhanaa’ were no flashes in the pan, he conjures another funny tale serving as the ace of the pack. Such finesse in the art of storytelling has not been achieved since the days of ‘Lage Raho’. He brings the rustic Haryana, a suave London and a bumbling Punjab together into one lingo masterfully. Mr Rai weaves a tale around those much lovable characters, which has been heard many times but still feels new because of the way it has been told.

Tanu comes back to Kanpur having irreconcilable differences with Manu in their marriage and while both of them are still sulking and licking their wounds, Manu meets Datto who looks just like Tanu. The angst phases out and before he can realise, he’s head over heels for this feisty young athlete from Jhajjhar (what a wonderful introduction !!). Complications arise when a divorce notice is served up from Tanu’s side and Manu decides to go on with it so that he can marry Datto. Rest is, well a madcap entertainment of one-upmanship (womanship as well !!) which will go down in the history of the Hindi cinema as one of the finest. Much credit goes to the director as well as the scriptwriter Mr Himanshu Sharma. Be sure, the dialogues are going to be oft-repeated in conversations the similar way the dialogues of ‘Sholay’, ‘Golmaal’, ‘Chupke Chupke’, ‘Lage Raho’.. are used. A wonderful writer, he proves his mettle once again, after the fine writings such as ‘Tanu Weds Manu’ and ‘Ranjhanaa’ and that tribute to Hitchcock. (‘Strangers’..).  Music by Krsna Solo is apt considering the situations, particularly Banno, Ghani bawri and Mari Galli are the recent chartbusters and are ruling the discotheques now.

Kangana Ranaut literally blows your mind with her portrayal of Tanu and Datto. Shifting between two characters must’ve been very hard but she does that with such ease that both characters come alive. Tanu was much loved in the previous movie but this one belongs to Datto. Kangana brings the Hariyanvi athlete into life with composure and brilliance of her acting prowess. Truly the new queen bee of Hindi cinema, she is one of the finest actors we have today. The scene where Datto admonishes Tanu for looking down upon her is truly brilliant. R. Madhavan, affectionately known as Maddy, plays his part as a troubled, loner husband perfect to the letter T. Girls, who are in love with him since the days of ‘Alaipayuthe’ (Drool again at this song..) are again going to fall in love with this charmer. You’ll smile at his goofiness, will feel his pain of loss and eventually you’ll marvel at his ability to play down his role, for the majority of the screen time has been devoted to Kangana’s both roles. 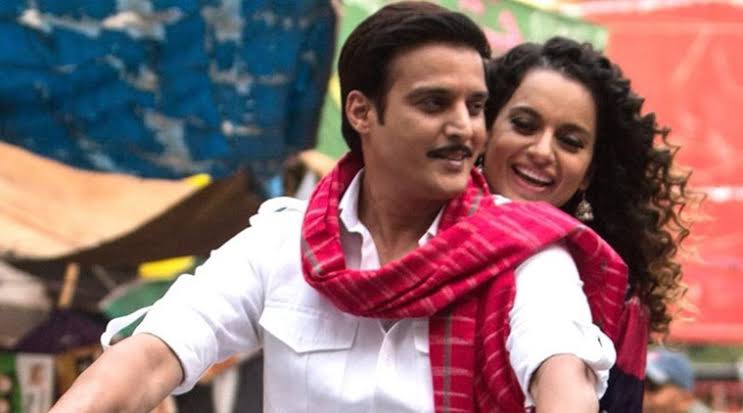 Just like the leads, the ensemble cast has also returned along with some new faces. Swara Bhaskar as Tanu’s friend, Eijaz Khan as Jassi, Mr Rajendra Gupta as Tanu’s father and Ms Navni Parihar as her mother, K.K Raina as Manu’s father are truly wonderful. Manu’s mother (Dipti Mishra) gets one of the rarest scenes where she keeps on complaining about the marital situation of his son in the background and Manu’s father calmly tells him to get on with life, sometime with water, sometimes with soda !!! Such scene stealers are rare. Mohd Zeeshan Ayub joins this crazy group as Chintu aka Kandha. He’s a revelation in his avatar of Tanu’s latest admirer. Jimmy Shergill as the much-wounded lover Raja Awasthi is at his best and brings the house down with his one-liners. One of the best moments of the movie is when he explains his amazement at Manu falling in love with both Kanganas’ as “Saale ko..original Bhi yehi rakhenge, duplicate bhi yehi !!!”.

But this movie belongs to Deepak Dobriyal. A phenomenal actor who understands his craft so well, that he makes you believe in his act, be it the Rajjo Tiwari of Omkara or the murderous lover of Not a love story. He’s back as Pappi Ji. Mr Dobriyal has etched this much-loved character so well, that every time he’s on screen, he sets it on fire.  He gets some of the best lines and performs them effortlessly. He has the audience rolling on the floor, with his witty quips. At Manu’s wedding, when the tailor is taking measurements, he sheepishly asks, “Kafan bhi silte ho kya bhaiya?? Silte nahi ho to do ready-made le aana !!” So is the scene where he angrily tells Manu not to fall for Datto stating “Yeh hota hai extramarital affair, abaidh sampark, gairkanooni rishta, sheeghra patan, dhatu ka girna… Don’t go to the dark path !!!!”  A gifted actor with tremendous potential, all I can say, Aye haye.. Papiiji !!!

Do yourselves a favour and watch this hilarious comedy…
As Pappiji would say, K..kk…kk .. Kya… Kya Soch Rahe ho ???