I spent some quality time of my life watching these two epic movies and the result was epuke !! I know, I know that word doesn’t exist on any of […]

I spent some quality time of my life watching these two epic movies and the result was epuke !! I know, I know that word doesn’t exist on any of the available dictionaries in the world. But trust me, when I say this – There are better ways to kill time.
Hence I thought of writing a special double feature on two worst biopics ever made. Read on my miseries… 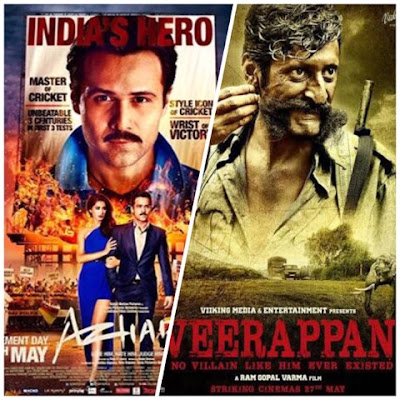 Azhar – Not A Review
When you are making a biopic on India’s one of most famous captains whose fall from grace made more headlines than his crafty wrists, it generates tremendous buzz. For the past year and half the buzz around Azhar was terrific. The life of Mohd Azharuddin probably had more spice than the entire oriental spice bazaar. So without believing the hearsay, I wanted to see the movie, officially endorsed by the man himself. I was so wrong.

The movie shamelessly glorifies the man as a person wrongly charged, a person whose integrity was unparalleled and he selflessly sacrificed his career to save his teammates. For those who were not born in that era or perhaps were a little unmindful to the events occurring in that time, here is my two cents – Bull crap !! For more details on his so called sacrifice, please visit this link.

Coming back to the film, unfortunately Emraan Hashmi does not look an iota of similar to Azhar. He painstakingly tries to mimic his gait and his style of playing but fails to deliver. He does look good in what he does the best i.e. kissing the lady. Prachi Desai plays his first wife and does okay. Nargis Fakhri continues her painful journey as an actress and causes more atrocities with her acting than the entire army of Boko Haram. The worst performance ever is by Kunal Roy Kapoor who is simply unbearable as a bald patch wearing,hideously accented lawyer. The actors playing other cricketers are mere caricatures and you wonder whether the team was actually serious while making this film.

Must Avoid. Not recommended even for satellite tv premier.

Veerappan – Opportunity Lost
There is a tagline on the film’s poster. It says –
It took 10 years to kill Osama Bin Laden
It took 20 years to kill Veerappan.
I would like to add one more – It took only one movie to lampoon him !!!

I am a big fan of Ram Gopal Verma. The man has got guts. He has an exquisite understanding of cinema and is not afraid of taking chances with unconventional stories. Each frame of his movies, is a vivid imagery of his insanely talented cinematic brain. Be it Satya, Rangeela, Company, Sarkar, Bhoot or his vintage class acts – Shiva and Raat. These speak volumes about his movie making prowess. But the reason of Ramu’s failure is Ramu himself. I will name Aag, James, Darling and you know why. So when I heard praises about his Kannada movie “Killing Veerappan”, the old fan in me woke up with hope. Unfortunately, the Hindi version (re shot and not dubbed) is a dud and only shows glimpses of the old Ram Gopal Verma. And that’s a pity.

Sandeep Bharadwaj, the actor playing Veerappan, is a revelation. He scarily looks his part and plays it with elan. The national award winner Usha Jadav as Veerappan’s wife MuthhuLaxmi looks real and does extremely well. The dense forest locales serving Veerappan’s den, the eerie ravines, they all come alive through Ram Gopal Verma’s eyes. A few  interesting camera angles, make things delicious. And that’s it. These are the only good things about the film.

Sachin Joshi as the STF officer is all about glam and style with zero acting. He hams and delivers his dialogues with a raspy voice and body language hinting constipation. The very beautiful Lisa Ray is excruciatingly wooden in her all important role of a vengeance seeking woman. The main culprits here, are the screenplay writer and the dialogue writer. There are some pedestrian dialogues, which when added to the woeful performances of Mr. Joshi and Ms. Ray manage to bring the house down. Its high time Mr. Varma hired a better writer. The meaty role of Veerappan fails to impress due to some lacklustre writing. It’s unfortunate because the same movie made in kannada has garnered praises from all corners, particularly for the acting of its lead actors.