Imagine this. Three men, fake disabilities to deceive a rich man to marry his daughters named Ganga,Yamuna,Saraswati who speak literally translated Hindi words from their English counterparts such as “Main […]

Imagine this. Three men, fake disabilities to deceive a rich man to marry his daughters named Ganga,Yamuna,Saraswati who speak literally translated Hindi words from their English counterparts such as “Main Bacche Nahin Bana Rahi hoon” (I’m not kidding) and “Kaamwali Gayi Kaamwali Gayi” (Let bygones be bygones). The rich man utters gems such as  “Aadmi ko Hamesha Haste rehna chahiye, Gambhir to Gautam bhi hai !!”. One of the suitors has a split personality disorder where the Hyde takes over the Jekyll at the utterance of the word “Indian”. Another has a foot in mouth disease as he regularly misplaces words, Virodh with Nirodh, Wife with Tawaif, Senty with.. You get the drift, right ?? With gazillions of self deprecating and self loathing jokes, this movie is a laugh riot and a sure shot blockbuster. 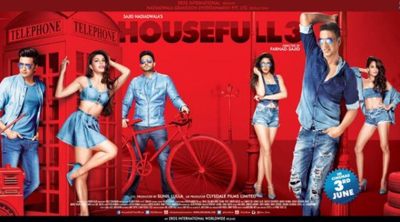 Never before I have sat through a movie where the audience is stunned by what is unfurling on the screen. By far, this is one of the most racially vilifying movie which by the way also mocks the physically disabled. And this time, I am not joking.
Comedies are supposed to be funny. It stops being funny when you write jokes around mocking people of their colour, creed and class. It’s the excruciatingly lazy writing by the director duo which makes the movie unbearable. The actors mostly do physical comedy which in this case, is pushing people on cactus plant, spreading ants on the pant and  crawling on the floor parodying the disabled. The female leads look pretty, dance around the trees and be bimbettes. Even the affable Ritesh Deshmukh cannot save the act by playing his usual goofy avatar. Akshay Kumar gets the most to do on screen with his Sandy/Sundy act but fails to impress. Abhishek Bachchan stays aloof in the crowd and doesn’t do much. Even the cameo by Jackie Shroff falls flat.
Housefull3 is so bad that it makes its predecessors look like oscar materials. The best bits of the movie, are incidentally the bloopers which appear at the end credits. It shows that the actors had a ball while shooting. Unfortunately the fun parts remained left out there.
Truly, comedy ki maa ki…puja karni hai !!!!